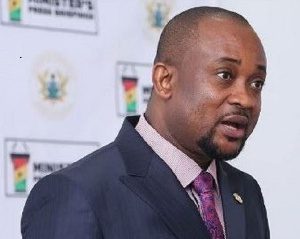 The Information Ministry of Ghana has alleged that the opposition, National Democratic Congress (NDC) is operating fake news websites and an institutionalized group of internet trolls aimed at interfering in political opinions and decision-making.

According to the ministry, the opposition in desperation to emerge victorious at the December 7 polls has gone to the extreme to even clone the official website of Graphic Ghana just to propagate demeaning news stories and rid the ruling government of the goodwill of the citizenry.

The Deputy Minister for Information, Pius Enam Hadzide made this revelation in an interview with the Happy 98.9 FM’s Samuel Eshun, host of the Happy Morning Show.

“The NDC is operating a fake news cell and a troll factory where big wigs of the party give instructions to their people who push their agenda on social media”.

Pius furthered that the NDC has managed to clone the websites of credible new agencies to also champion their fake news agenda.

“They are a lot of these fake news websites and the NDC has even managed to clone the website of Graphic Ghana. The cloned website has the same outlook of Graphic Ghana but the difference is that the NDC’s website carries fake news only”.

He furthered that the NDC has also imported some sophisticated artificial intelligence equipment with voice cloning abilities to aid in their fake news production.

The minister pointed to all the above as deliberate and conscious attempts by the opposition to tarnish the image of the government and asked Ghanaians to disregard such information and be particular of the news they consume.

The politician was quick to add that these troll and fake news websites are against the laws of the country and warned people being used as ‘puppets’ by the opposition to desist from the act for their own well-being.