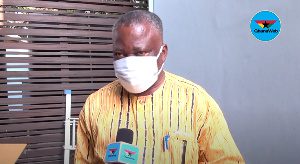 Renowned Ghanaian security analyst, Colonel Festus Boahen Aboagye (rtd) has linked the current rise in criminal activities in the country to the recruitment of some unqualified individuals into the nation’s security setup.

Speaking in an interview with GhanaWeb, Col. Aboagye said the country is paying for politicizing recruitment into the National Security and other security agencies which have resulted in a weakness to fight crime.

He made specific mention of Bright Ernest Akomea a.k.a Double, a National Security Operative involved in the Ayawaso West Wuogon violence, and cited the recruitment of his likes as security officers to be something dragging the nation’s security back.

Double an NPP sympathizer in 2019 told the Justice Emile Short Commission of Inquiry he was dealing in mobile phones at the Kwame Nkrumah Circle in Accra before he joined the National Security set-up. He told the commission he was trained for three weeks as a recruit when he joined the national security apparatus.

“Dr Kumbuor, the former Defence Minister made the analogy that assuming you use your influences to get your family member to become a nurse, not properly trained. The next time you fall ill, you go there or somebody’s whatever goes there and it’s that nurse who is looking after you, you will die. One of the implications of this politicization is that we put in men and women into the security services who, for instance, may not have qualified but because of political influence we put them in. They are not there to work, they are there to collect their salaries, not there to sacrifice their life for anybody. The likes of Double, Mr Akomea and Co, who are in National Security, that’s the price that we are now paying,” he said.

He emphasized that the activities of criminals in the country will not go away anytime and therefore it must take the police service applying effective measures to the barometers affecting the crime rate in order to bring criminal activities in the country down.

Col. Aboagye was speaking about the state of the country’s security in recent times and the role of the security forces in ensuring citizens are safe.

His comments come following the murder of MP for Mfantseman.

Mr Ekow Quansah Hayford, the MP for Mfantseman was attacked by robbers on the Abeadze Dominase – Abeadze Duadzi – Mankessim Road when he and his team were returning from a campaign trip.

Eyewitnesses say the MP while the robbery was taking place identified himself to the criminals, who got infuriated and shot him twice, killing him instantly.

His driver, one Mr Issa, who also sustained gunshot injuries subsequently died at a health facility.

The MP’s death has reignited calls by his colleagues in the law-making house for the state to provide them with personal security.

However, Colonel Festus Aboagye (rtd) believes there is rather the need to ensure every citizen of the country has the necessary protection and feeling of safety instead of attaching security officers to MPs without providing effective security across the county.

“The fact that you have police escort doesn’t mean you are secured,” he stated.