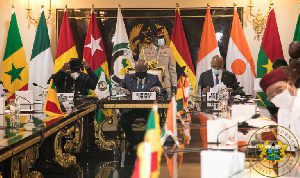 Ghanaian journalist and co-host of Happy 98.9FM’s Happy Morning Show, Raymond Nyamador, has said said that some of the leaders involved in the Economic Community of West African States (ECOWAS’s) meeting on Mali’s political crisis yesterday did not deserve to be part of the negotiations.

President Nana Addo Dankwa Akufo-Addo called on leaders of ECOWAS to deliberate on the way forward following the forceful resignation of Mali’s president and the takeover of the country’s governance by military junta.

At the said ECOWAS meeting, the ruling military junta was warned to ensure a civil transition in a matter of days.

Speaking about the meeting, Raymond Nyamador was of the opinion that certain political leaders in the meeting lacked the moral right to call on the military in Mali to quickly hand over power to a civilian government.

“Even at that table yesterday, there were leaders there who did not even have the moral right to tell the General Colonel Goita to go and restore Mali to constitutional rule. Because they themselves have circumvented constitutional rule to still stay in power.”

“Faure Gnassingbe was there. Alpha Conde was there. Our good friend Ouattara was also sitting there. These three men’s inclusion defeats the purpose of that meeting.”

According to him, the presence of these leaders will have an effect on the Colonel who has taken charge of Mali’s affair with his military.

“The young colonel will be sitting at that table looking in their faces and say that these people are civilian rulers but they have even behaved in worst ways than we military rulers will behave. In his mind, he will say, ‘why should I take moral lessons of constitutionality from these people?’. So you tell him to go back to Mali to return power to civilian government as if he hasn’t seen how civilian government operates”.

The rest were the leader of the National Committee of the Salvation of the People, Col Assimi Goita, of the military junta in Mali.

Some of these ECOWAS leaders have had their government marred by some political crisis.

Faure Gnassingbe Eyadema is a Togolese politician who has been the President of Togo since 2005. Before assuming the presidency, he was appointed by his father, President Gnassingbe Eyadema, as Minister of Equipment, Mines, Posts, and Telecommunications, serving from 2003 to 2005

Alpha Conde is a Guinean politician who has been President of Guinea since December 2010.

Guinean President Alpha Conde announced plans in December last year to replace the country’s constitution via a referendum, a move that critics say will allow him to stay in power beyond the current two-term limit.

Guinea’s existing constitution requires the 81-year-old Conde, who was first elected in 2010, to step down after finishing his second and final term later this year.

President Alassane Ouattara was elected as president of Côte d’Ivoire in 2010.

Despite Ouattara’s victory, the incumbent, Laurent Gbagbo, refused to step down, and the two established parallel administrations that both claimed legitimacy—until Gbagbo’s arrest in April 2011.

Ivory Coast President Alassane Ouattara, however, recently made it known that he would go for re-election in October 2020, defying opponents who say that the constitution forbids a third term.