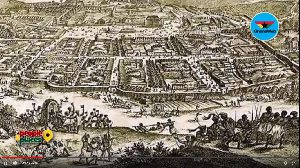 A number of narrations have emerged about Komfo Anokye, the close companion of Otumuo Osei Tutu I.

More often than not, he has been described as someone whose birth was surrounded by very notable miracles.

Many have named Awukugua as his birthplace, some also say he has Nzema routes.

Meanwhile, the Anlos also have their version. In their case, they believe Komfo Anokye was a twin of legend Togbi Tsali.

His name, according to them, was Tsala. Also per their narration, Tsala became Komfo Anokye after he had, whilst migrating to other lands, settled at Awukugua in the Eastern Region.

As part of the persons who escaped from the grips of King Agorkoli in Notsie, he eventually earned the name “Komfo Anokye” which they say, is the corrupted version of “Komfo from Notsie.”

There’s that, and then an entire conversation about the formation of the Anlo Kingdom, its States and Clans.

Watch this edition of People & Places as Historian and Spokesperson to the Awoemefia, Togbi Sri III tells the history of the Anlo subgroup of the Ewe ethnic group: