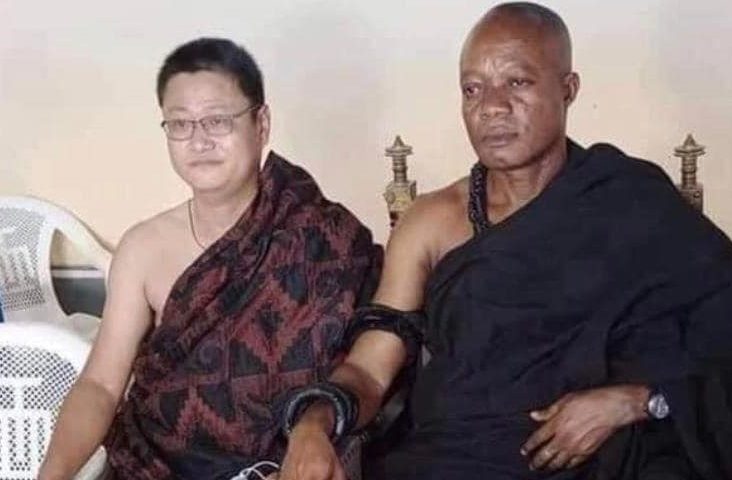 My hometown Abetifi in Ghana is one of the most beautiful and richest towns in Ghana with an attractive moderate all-year climate. It is sad and a disgrace to see the Abetifi enstoolment of a Chinese as “Chief“ simply because he had built a school building for some village out of his successful business.

For a very small price reported as less than $5,000, the Chief has granted unlimited rights for logging the trees and taking massive amounts of land for mining and other business as the Chinese deems fit! This is very serious!

In response to criticism the Chief gave an audio explanation that was posted on an Abetifi Global Forum we created. Now that this news has been published on Ghanaweb and gone global, as a senior member and leader, I hereby edit the response I posted yesterday on the forum.

I have listened to the Abetifi Chief’s explanation and understand the reason, and that this has been done in other parts of Ghana. However, no educated man should accept that! We as Africans were fooled in the 13th to 19th centuries to sell our own people as slaves and eventually dominated by Europeans who colonized our people and took our mineral and other reserves for free in exchange for bottles of Schnapps and Whiskey! Today we say Enough is enough!! We are no more naive! No! Our Land and Natural resources on the land and underneath the land have value!

Our corrupt Presidents and their families are merely waiting for the anger of the people.

When our own people overseas ship goods and cars home, the Government charges duties and taxes, sometimes as high as 50-150% of the stated value of the cars. How much of that comes to Abetifi or Kwahu? The Kwahus think they are rich and vote massively for one Party as favorite; but is the Development in Kwahu proportionate to their wealth? No!

Ghanaian towns and districts need Laws in writing just like Central Government has laws. These laws should include taxation laws on land and real property on land- meaning residential and commercial buildings. The Kwahus have educated Lawyers also. Lets put them to work! Being custodians of land does not imply the Chiefs own the lands. No!

After 63 years of Independence and sending our children overseas to learn, there should be some knowledge about how other nations manage their resources, towns and nations we can adopt for our own survival. Today most of these Chiefs are well educated, some even Lawyers. There is no excuse for selling our lands to foreigners in exchange for small gifts to the Chiefs! No!

Africa is poor because we have not been able to value our land and resources and greedy and selfish educated elected and non-elected Chiefs seem to think only of themslves and their families. It is time for change! It is time to learn that the land belongs to all the people! God did not assign any powers or individuals to lands save by man’s brute force or patapaa. Modern reasoning should reign.

If a man builds a factory or business on say 2 Acres of land (about 16 plots), simple laws could imply:

1. The land by itself attracts a sales price and taxes. That in Ghana goes to the Chiefs alone. However,

2. There is an annual tax on the building- called Property Tax.

– For Residential – this could be say 1% of the value of the building per year. A typical building may attract say 4,000 per year or 333 per month – same as some water rate in places like East Legon in Accra.

– For Commercial rates this could be calculated as cedis per usable building area per year (See article by J. Bishop-Henchman ):

“In Fiscal Year 2010, state and local governments (in the USA) collected $441.6 billion in property taxes, comprising 23.5 percent of state and local own-source revenue.”

That is the formula modern nations use. This idea of making foreigners Chiefs of “Progress” or Nkosoo smells more like giving them power and respect for taxes that we should be collecting instead of a gift from them. No! If a school building costs Ghs 300,000 to build, perhaps the taxes on his timber logging, factory output or residential/commerical building would be far more than that.

It is time our educated Chiefs learned a few modern tricks of the global game of nations and peoples’ survival.

I have published many articles over the years about the need for local Town /District and Regional Governments with elected democratic powers to collect taxes and responsibilities for the needs of the local people. For selfish reasons all leaders in the 4th Republic- from Jerry Rawlings to JA Kufuor, Atta Mills, John Mahama to Nana Akufo Addo have preferred to ignore the need to formalise and elect local leaders. They have all failed to define the role of Chiefs also. It is time to do that.

Every modern Democratic nation does that! Great Britian saw the wisdom after the Glorious Revolution of 1498 and allowed an elected Parliament as they have today. It is time that Ghana learned to do that.

The procedures and formula I posted on the forum is simply this:

How To Create a TOWN COUNCIL:

(the beginning of Democracy)

In the research and work I did, leading to a presentation I made at a meeting in Adabraka in 2007, we as a people

1. Have to announce a meeting and discuss the merits of the Town Council.

2. Have an Interim Chair or Committe take nominations of candidates for the Council and write a short Constitution and Charter. The Charter and Constitution empowers the Council to find ways to generate revenue for projects and needs of the town. Their powers and limits, salaries and managerial requirement for accounts, etc can all be spelled out. (Some of us with knowledge of American or UK land and real estate laws can help do this).

3. On the day of the meeting conduct the vote and announce who the Council Members are and the Mayor is.

4. Publish this in the National Gazette.

In Conclusion I can say that Ghana’s lands in every community may be worth billions of dollars. It is left to us as a people to use the knowledge we have accumulated in the post-Independence era, especially public knowledge and experience of our oeople who have lived overseas, and learn to create wealth in our own lands!

Let us stop expecting wealth to come from outside as our Presidents and local Chiefs seem to be doing by selling our lands cheap.

Books by the Writer:

Leadership Concepts and the Role of Government in Africa: The Case

LIFE IS WAR: A Letter to Nephews and Nieces and Loved Ones Behind on How to Succeed Using Your Mind (Page Publishing, 2017)