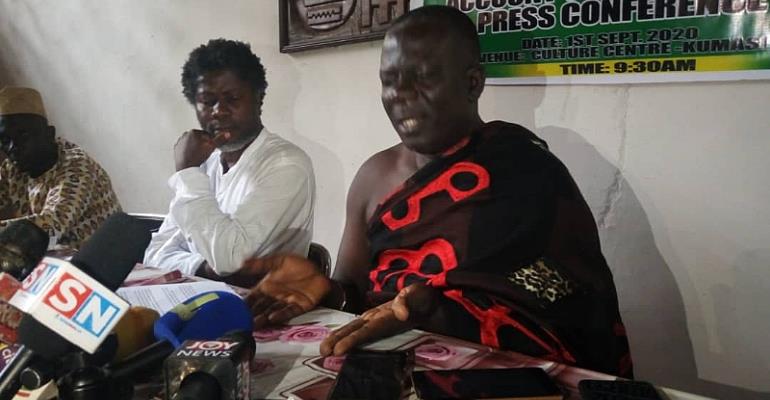 Leaders of a pressure group in the Ashanti region calling itself Concerned Youth Of Asante (CYA) says it is about time the NPP government thinks about the welfare of’ Asanteman’ which has been loyal to the party as its stronghold for decades.

The group says the NPP government has broken the trust and confidence the people of Ashanti region had in the party for ages due to the lack of development in the region.

Speaking at a news conference in Kumasi, the President of the Association, Dr Nana Agyenim Boateng aka ‘Gyataba’ is challenging the New Patriotic Party (NPP) to account to ‘Asanteman’ any single project it has done in the Ashanti region since President Akufo-Addo assumed office almost four years now.

He indicated that former President John Dramani Mahama last Thursday at the Manhyia Palace accounted to Asanteman and Otumfour Osei Tutu II, the number of projects he was able to bring to the Ashanti Region when he had the opportunity to serve as a president of the republic for just a term.

“It is on this basis that we want President Akufo-Addo to come and do same by accounting to the people what he has done for us all to see. It’s our hope and prayer that President Nana Akufo-Addo will also go and show Asantehene and the good people of the Ashanti kingdom his projects in the Ashanti region.”

He continued, “As a group that is determined to fight the progress and development of Asanteman, we hereby also challenge the good people in the Ashanti region to compare and contrast the kind of votes that are given out to the NPP and the kind of development we receive in an exchange whenever NPP was in power and do same to the NDC.

“We can say on records that, per our checks, since 1992, NDC has achieved a lot in terms of physical developmental projects in the Ashanti region than the NPP but receive less of our votes.”

Dr Nana Agyenim Boateng wondered if they are doing good to themselves for supporting a party (NPP) that do not think about their welfare and development.

“It’s about time we think and re-think about the kind of party we sacrifice our votes for as a native of Asante. This, we are saying is the truth and the truth needs to be told. CYA is not far for right if we say the NPP takes Asanteman for fools. This is because the NPP only deceives Asanteman when they needed votes and dump us when we cry for development. we are now wise and can no longer be deceived by the self -seeking Nana Addo’s government and the NPP.

“Let me highlight on a number of projects that were brought to the Ashanti region under the NDC and John Dramani Mahama’s four years as president,” he emphasised.

“Do you think we will be crying for development by now if NPP was able to develop our region as done in John Mahama’s four years? Let me say again that, the NPP takes our resources and develop other regions that are of their interest with them.

According to him, is it wrong for President Nana Addo to establish a movie theatre at Akyim-Kyebi where not even a single soul in the area is known to be an actor or actress whereas “we have the likes of Lil -Wyn, Kwaku Manu, Kyeiwaa, Mercy Asiedu, Kwadwo Poku Mahala, Agya Koo just to mention but a few who are struggling to even rent hotels for good movies.”

He stressed, “A Bauxite concession at Nyinahini in the Ashanti region which was awarded a contract to a Ghanaian based businessman was just terminated and now a Chinese businessman is operating. The NPP cut our timber and develop other regions with them. Before I conclude, we want to be clear if we are always made slaves under NPP and we expect Nana Addo to tell us.”