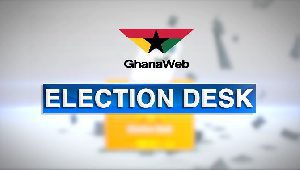 Ghana’s first and most popular news portal, GhanaWeb has unveiled its latest addition to its programming, -GhanaWeb Election Desk- ahead of the December 2020 general elections.

GhanaWeb Election Desk seeks to bring to our readers and viewers an insight into all sides of Ghana’s election journey.

The captivating and informative programme will showcase interviews and projections from some of the nation’s political actors, opinion leaders, showbiz personalities among others ahead of the general elections.

The programme will also project the expectations and will of the electorate.

The GhanaWeb ‘Election Desk’ will be brought to you on GhanaWeb TV on YouTube and www.ghanaweb.com.

Ghanaians will on December 7, 2020 go to the polls to elect a President and Vice President as part of four-year constitutional mandate in a general election.

Some 275 Members of Parliament are also expected to be elected to their constituencies using the first-past-the-post voting.

For the elections, only eligible voters who are Ghanaian citizens and are at least 18 years old and above will be allowed to take part in the exercise.

The country’s electoral body, the Electoral Commission, on it’s part has captured the biometric data of over 16 million Ghanaians following the just ended compilation exercise of a new voters register.

Watch the promo for GhanaWeb’s Election Desk below: