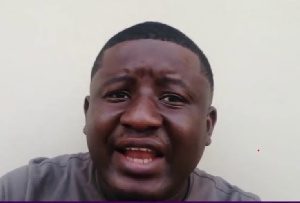 Hundreds of supporters of opposition National Democratic Congress (NDC) have massed up at the Nima Police Station in Accra, where the President of the Concerned Small Scale Miners Association is being held.

They are demanding the release of the President of the Association, Michael Peprah, who was picked up on Saturday, August 29, 2020, by police over a Facebook post.

He was picked up in Kumasi, the Ashanti Region capital and subsequently transferred to Accra, according to reports.

Unconfirmed reports say Mr Peprah was arrested on the orders of the Minister of Environment Science and Technology, Professor Frimpong Boateng.

Earlier, the NDC condemned the arrest, calling it shameful.

“This morning we got information that the president of Concerned Small Scale Miners Association of Ghana has been arrested by officers belonging to the Cybercrime Unit of the Ghana Police Service in the Ashanti Region.

“We understand that he was detained at the Ashanti Regional Office and this morning transported to the Nima Police Station. We’ve spoken to him and he tells us that he was arrested yesterday at 3 pm in Kumasi and was not told the reason for his arrest. His phones were seized and taken to his house and a search was conducted,” the opposition party said in a statement.

Shortly after the statement was released, GhanaWeb received the following message from a known NDC source:

He was arrested in Kumasi and hurriedly transferred to Accra for causing fear and panic by a statement he posted on his facebook wall.

According the NDC, Mr Peprah was arrested because he has information that will expose the Nana Akufo-Addo government’s alleged nefarious activities in the mining sector.