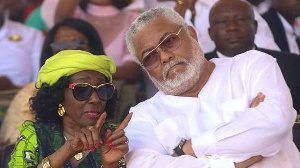 However, he said it was not clear who was at fault, but one culprit stands-out- the ambition of Nana Konadu Agyeman-Rawlings to lead the NDC and to become President of the Republic of Ghana.

According to him without exception, every person that Koku Anyidoho and he spoke to in the course of writing the Biography of President John Evans Atta Mills was convinced that Mrs Rawlings played a significant role.

Recounting events, he said not too long after Kofi Totobi-Quakyi had been appointed Minister for National Security and had therefore necessarily become very close to Rawlings; and at a time when he was also very free with Nana Konadu, she called him one day and asked him to deliver a message to Totobi-Quakyi.

“Ko ka kyere wo Totobi no se onim se nea me si bree ye ansa meregye me kunu afiri Kojo Tsikata ne P.V. Obeng nsa mu, anka enye se ono nso aba na orebepe se obegye no afiri me nsam bio no” (go and tell that your Totobi that if he knew how I struggled to snatch back my husband from the clutches of Kojo Tsikata and P.V. Obeng, he would not be making the mistake of he also wanting to snatch him from me again), he said.

He said obviously a very jealous wife Nana Konadu is, she must have seen these working colleagues of her husband’s as rivals who were taking too much of her husband’s time as a result of which he did not have much time for her.

He said the outcome of Nana Konadu’s role in the estrangement between Rawlings and his comrades was the formation of ‘Get Atta Mills Elected’ (GAME), the political vehicle formed largely by pro-Mills elements within the NDC who were also mostly former Rawlings loyalists, to promote the presidential candidacy of Atta Mills in the NDC primaries.

“But because Rawlings had fallen out with Mills and was backing candidates opposed to Mills, the pro-Mills GAME also unconsciously became an anti-Rawlings vehicle and on board this vehicle were Ato Ahwoi, P. V. Obeng, Kwame Peprah, Kofi Totobi-Quakyi and myself, with Captain Kojo Tsikata as one of our advisers. It was against this near-invincible NDC political vehicle that Nana Konadu pitched her band of inexperienced neophytes under the banner of Friends of Nana Konadu Agyeman-Rawlings (FONKAR),” a portion of the book disclosed.

He added that the seeming anti-Rawlings stance of GAME reached its apogee when Nana Konadu decided to contest President Mills at the NDC Congress at Sunyani in 2011 for the presidential candidacy of the party for the 2012 presidential election.