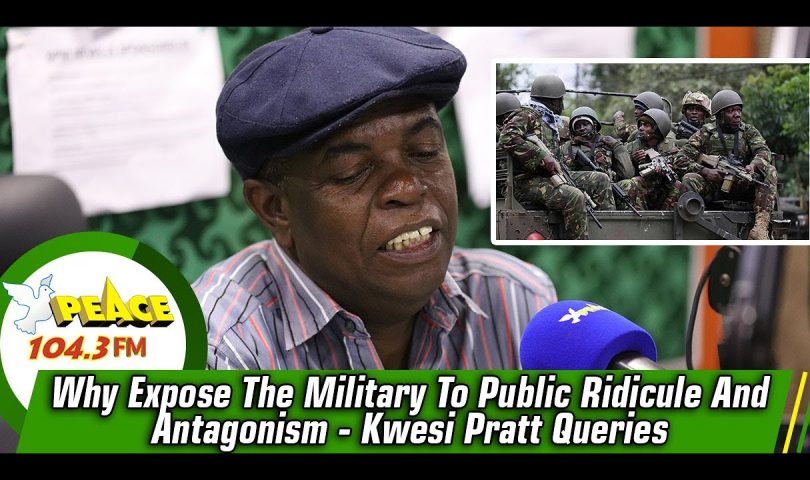 Seasoned journalist, Kwesi Pratt has questioned the government’s logic in the deployment of military personnel to guard some Regions in the country.

The Military was deployed to protect the country’s borders and also ensure persons who are not Ghanaians didn’t steal themselves to participate in the voter registration exercise.

It became necessary for the Military to given this task following reports that some persons were using unapproved routes to enter the country, particularly when the borders have been closed to avoid the spread of COVID-19.

But the presence of the Military in the Volta Region and some parts of the country sparked controversies with members and leadership of the opposition National Democratic Congress (NDC) alleging that the President has taken such move in order to intimidate residents in those Regions and prevent them from registering their names for a voter ID card.

They further accused the government of using the Military to advance their agenda which they believe was to disenfranchise some Ghanaians.

Addressing the issue, Kwesi Pratt blamed President Akufo-Addo and his government for the distrust in the Military’s work.

He asked why the President decided to assign the Military to guard the Regions and not the Ghana Police personnel.

To him, it was rather the duty of the Ghana Police Service to maintain law and order and giving such assignment to the Military exposed them to public ridicule and antagonism.

”A lot of times if you force soldiers to do the work of the Police, it causes lots of trouble . . . It makes them lose focus and then you expose them to public ridicule and antagonism.”

”What is the essence of deploying all these soldiers when we’re just registering names? Are there no more Police personnel?” he questioned on Peace FM’s ‘Kokrokoo’.