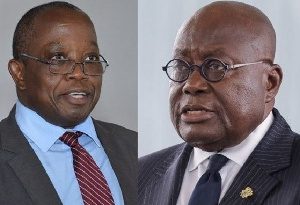 More than 67% of respondents who took part in a poll hosted by GhanaWeb asking if it was right for the locks on Daniel Domelevo’s office to be changed while he was on leave have answered “No.”

The question asked in the poll that expired last week was “Is it right for Domelevo’s locks to be changed while on forced leave?” Respondents had the option to answer “Yes,” “No” or “Indifferent” to the question.

Only 174 respondents selected “Indifferent”, representing 3.29% of the total votes.

The poll was hosted by GhanaWeb following wild and mixed public reaction to a directive by the President to the Auditor General, Daniel Domelevo, to proceed on leave, much to Auditor General’s dismay and his displeasure.

Mr Domelevo wrote to President Nana Addo Dankwa Akufo-Addo, urging him to change his mind. At the time, the order was for him to take his two years mandatory annual leave – which at the time was 123 days.

However, in reply to the Auditor General, the President increased the leave days to 167, now including accumulated leave for 2019 which had not been included earlier.

Over 400 CSOs kicked against the directive and described it as an affront to democracy and the fight against corruption.

Mr Domelevo’s office is one of the main independent anti-graft government agencies.

Matters got to a head when it emerged that while Mr Domelevo was on the forced leave, the locks on the door to his office had been changed without his knowledge. Mr Domelevo said he had gone to the office to pick up some documents.

Again the public seemed sharply divided over the matter, as government both got criticised and praised for changing the locks on the Auditor-General’s door.

The poll was then launched by GhanaWeb to properly gauge the mood of Ghanaians on the matter.

GhanaWeb launched its polls in May with the first question being: should the EC go ahead with the new register?

This poll question gained 141,132 responses in 48 hours and over 2,000 people commented under the poll expressing divergent views about the Electoral Commission and the new voters’ register.

The poll seeks to enable GhanaWeb readers to predict the opinions of Ghanaians on issues and decisions that affect the country.

Results from this poll is only representative of participants and therefore can not be generalised.