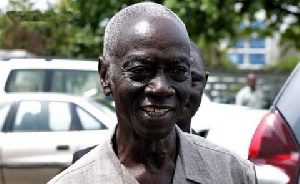 Prof. Kwamena Ahwoi, a former Local Government and Rural Development Minister has chronicled the roles that Jerry Rawlings and Captain Kojo Tsikata played in the establishment of the Electoral Commission after its enabling legislation had been enacted.

He wrote in his book, “Working With Rawlings” that, in the period of the transition from revolutionary rule to Constitutional rule, Justice Josiah Ofori-Boateng, the Chairman of the Interim National Electoral Commission (INEC) served notice that he wanted to return to the Bench as a Court of Appeal Judge.

In this instance, Captain Tsikata suggested that Dr Afari-Gyan, the man he “discovered” at the Achimota Drinking Spot be promoted to the position of Chairman of the INEC later to be known as the Electoral Commission of Ghana.

“President Rawlings agreed, the PNDC approved, and it became a done deal,” he recounted in his book.

He continued that just around that time, Nana Oduro Numapa, the Deputy Chairman of the Commission (Finance and Administration) died. And Captain Tsikata suggested that he should be replaced by another eminent Ashanti.

Mr Dixon Kwame Afreh, an Ashanti and an eminent legal academic and therefore an eminent Ashanti who had taught Mr Ahwoi Criminal Law at the Law Faculty of the University of Ghana, who had unceremoniously resigned his position at the Pan-African News Agency (PANA) as Director-General and had returned home was appointed.

According to him, he took him to see Captain Tsikata who was excited at his joining the INEC team because of his (Afreh’s) CPP background.

“The two of us took him to Chairman Rawlings. Rawlings agreed to his appointment. Mr Dixon Kwame Afreh became the Deputy Chairman, INEC, in charge of Finance and Administration,” he said.

For the position of Deputy Chairman, Operations, David Kanga, Headmaster of Navrongo Secondary School and a respected opinion leader from the Upper East Region and who had chaired on the sessions of the regional fora on ‘Evolving a True Democracy’ organized by the NCD, was approached to fill the vacancy and he accepted.