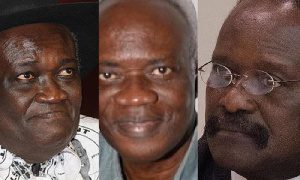 Controversial member of the opposition National Democratic Congress (NDC), Dela Coffie is of the view that there is no family that has profited more from the PNDC/NDC than the Ahwoi Brothers.

According to him, neither the Tsikatas nor the Rawlings’ family have enjoyed more under the PNDC/NDC compared to what the Ahwoi brothers have had.

In an post to critique Ato Ahwoi book on “Working with Rawlings”, Mr Cofie said Professor Kwamena who is the author, happens to be one of the first of the Ahwoi brothers that Chairman Rawlings invited to join the PNDC in the early 80s.

But his desperation for power in taking over the NDC with his brothers whom Dela Cofie described Professor Ahwoi as someone who “whipped up contempt for decent activists and waged a war of attrition against people they saw as competition – they schemed to sideline, and alienate quite a chunk of well-intentioned NDC activists”.

Prof Kwamena Ahwoi happens to be one of the first of the Ahwoi brothers that Chairman Rawlings invited to join the PNDC in the early 80s.

All the while, everything was fine and in Kwamena Ahwoi’s mind, Rawlings was indeed a saviour – Junior Jesus. He enjoyed his working relationship with Rawlings and the trappings of power. The power was so sweet that he managed to convince Chairman Rawlings to find some space for his two other brothers. He later brought Kwesi and Ato Ahwoi on board.

And that was the beginning of the “Ahwoi Brothers and Co. Ltd.”

Ato Ahwoi used his connection with the regime to establish a Business empire. The CASHPRO Business raked in millions of cedis and between 1993 – 2000, CASHPRO had obtained at least 26 credit facilities from the Agricultural Development Bank.

CASHPRO used its strong contacts with the PNDC/NDC to obtain more and more credit facilities from the National Investment Bank and Ghana Commercial Bank. I’ll leave the rest of the CASHPRO story for another day.

But then again, there’s no family that has profited more from the PNDC/NDC than the Ahwois. Not even the Tsikatas nor the Rawlings family.

Somewhere in 2001 after the electoral loss of the NDC, the party under the chairmanship of Dr. Obed Asamoah embarked on a reorganization of its structures. And in the midst of the reorganization came the mantra “the new NDC.” The idea behind the so-called new NDC as it were, was to shed the image of the Rawlings led NDC and its June 4th and 31st December antecedents.

That was when the plot to alienate Rawlings kicked in. Most cadres who worked for the success of the PNDC were pushed out but intriguingly Kwamena Ahwoi refused to take the back seat as was the case with others. He shrewdly shed his beard and returned with a new outlook to the fold of the new NDC together with his brothers.

Don’t forget that the idea behind the so-called new NDC was to rid the party of its old image and infuse new blood into its system, but the Ahwoi brothers, who represent the problematic old face of the party, found a way back to the centre stage of the party after months of high-key scheming.

On the other hand, a lot changed since 1981, but the underlying motivations for these political profiteers did not. And as expected, The Ahwois didn’t disappoint. They whipped up contempt for decent activists and waged a war of attrition against people they saw as competition – they schemed to sideline, and alienate quite a chunk of well-intentioned NDC activists. Eventually, they won the heart and mind of Prof. Mills – And then constituted themselves into Mills’ “brains trust,” and took his Presidency by the scruff of the neck.

Under the Mills Presidency, the Ahwoi brothers had their hands in several pies in government. Having been able to scheme to have their brother-in-law appointed as Director of Ghana’s foreign intelligence work popularly called the Research Department (RD), they also placed their sister in a privileged position and she profited from government contracts.

The Ahwois were not only involved in the oil industry with Ato being the boss of GNPC but they were also involved in the importation and sale of rice in the country, and Kwamena Ahwoi raked in so much business from warehouses in the Free Zones enclaves.

Their children and kith and kin had the best of education with government scholarships to Ivy-league Universities in the US and other established institutions of higher learning.

So, you see, these guys didn’t come to play. It was all about their comfort, and the comfort of their family.

In the heady days of their power drunkenness, they adopted divide and rule tactics and also introduced exclusionism into the NDC – It is either you do their bidding or find yourself on the fringes – These greedy elites together with their hangers-on and selected party patrons rewarded themselves with pillages while majority of the party folks bore the wrinkles of social adversity.

This is who they’re – the profiteers of the Rawlings’ Revolution. And after almost 40 years of profiting, Kwamena Ahwoi is out with a so-called tell-all memoir in a bid to demonise the very man whose toil and sweat gave them name recognition.

These guys are so obsessed with Rawlings, and their sense of criticality is only limited to tearing Rawlings apart.

Kwamena Ahwoi in his book says from his personal assessment of Rawlings during the 19 years they worked together, he did not appear deep philosophically and ideologically. These same Ahwois – Ato for that matter was rumoured to have once described Mills behind closed doors, as “delusional, paranoid, hallucinatory and lacking mental capacity.”

For them, it is about what they can take and as much as they continue to rake in the profit, no one else matters.

Social democracy means nothing to these political businessmen. And they simply don’t believe in the value of a governing concept that promises equitable distribution of resources.

As matter of fact, you cannot tell if this “Fante Cabal” are social democrats, democratic socialists and capitalists in socialistic garbs or simply confused people operating under the clueless tenets of an ideologically questionable background.

Prof. Kwamena Ahwoi, when are you going to dig into Kwamena Ahwoi’s past when he headed the dreaded Citizens Vetting Committee (CVC) in the PNDC era and hid behind screens and quizzed hapless victims on how they came to own table-top refrigerators? Should we expect another memoir in this regard?