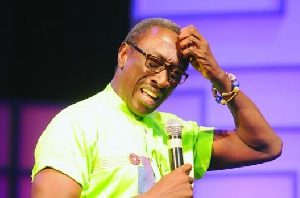 Self-acclaimed King of Prime-time TV and godfather of Ghanaian comedians, Kwaku Sintim Misa, famed as KSM, has questioned the government’s intention to build a national cathedral.

KSM threw the question to the leadership of the country while speaking in an exclusive interview with Nkonkonsa.

The on-screen personality inquired why the government wanted to spend so much money to build a cathedral. He queried if God would come down to live in the cathedral.

He insinuated that building such an edifice to please God was a misplaced priority since many Ghanaians were still living in filth and abject poverty.

“Just imagine Ghana, with all respects wanting to build a cathedral of how many millions of dollars? Why? Does God live in that cathedral? I would take you to places in Accra here where you would see the filth and poverty that people are living in,” KSM recounted.

According to KSM, left to him alone, the millions being channeled into the building of the cathedral should be used for the personal development of the citizenry.

The ace TV show host was speaking on how religion had become so institutionalized and being used to con people and ridding them of their money.

He also touched on the fact that organized religion had skewed the thinking of many people such that they acted without thinking through them logically.

KSM also hit at men of God who claimed to possess healing powers and asked them to seek permission from President Akufo-Addo to heal Ghanaians who have contracted the COVID-19.

Following this statement, KSM indicated that since he was born, he had never come across a genuine prophet.

Watch KSM make his submissions below: