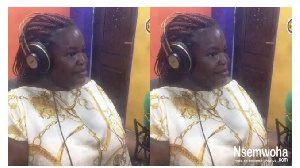 A 30-year lady identified as Debbie Neequaye has poured her heart out in an interview with MP on Accra based Kingdom Plus FM, narrating how her husband left her to marry a different wife after she secured a loan for him.

In her narration, her mother was left to fend for herself since the one who got her pregnant chose school over her. The mother got married to a different man when Debbie was barely two years.

It was in her step father’s house that she lived with her mother until she was fourteen years when her mother introduced her to her real father. She moved to stay with her father at Alajo, a suburb of Accra. Due to ill health, she had to abandon school at JHS one.

She moved to settle with a friend at age twenty-four. It was with this friend that she met her ex-husband. In Debbie’s narration, the man pressured her to come and stay with him because he didn’t want to lose her. Out of love, she succumbed to the pressure.

It was then that the husband requested that she should secure a loan for him to start a business. Debbie secured the loan of Gh¢8,000 for the husband. The husband’s behavior towards her started changing afterwards.

Debbie Neequaye stated that during the turmoil in her love life, she logged onto Facebook one day only to see her husband and another lady about to marry. Watch the interview from the beginning to the five minute mark in the video below.

The two had a baby while she was into beads making. The husband according to her was very supportive until when she fell ill and couldn’t be productive in her beads business.