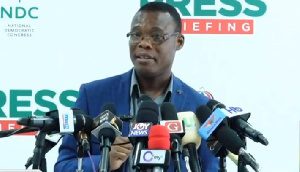 The General Secretary of the National Democratic Congress, Fifi Kwetey, has stated that the party’s leadership will not modify the changes it has made to the leadership of the minority in parliament.

Speaking in an interview with Citi News on Tuesday, January 24, 2023, Fifi Kwetey said that the decision was made after consulting with party members and national executives so the party will not reverse the decision.

He added that the party will proceed with the leadership changes when parliament resumes in February.

The NDC in a statement signed by the General Secretary, Fifi Kwetey announced that it has made changes to the leadership of the minority in parliament.

The former Deputy Minister of Finance, Dr Cassiel Ato Forson, has been appointed as the Minority Leader in the 8th Parliament of Ghana’s Fourth Republic.

Ahmed Ibrahim, MP for Banda, has been maintained as the First Deputy Minority Chief Whip, while Comfort Doyo Cudjoe-Ghansah, MP for Ada, is the Second Deputy Minority Chief Whip.
Meanwhile, The Tamale South Constituency Chairman of the National Democratic Congress (NDC), Abdul Rauf, has said that he and his constituents will not accept the decision of the national executive of the party to replace Haruna Iddrisu as the minority leader.

According to him, if the party fails to rescind its decision, he will lead the party’s faithful in his constituency to vote against it in the 2024 general elections.