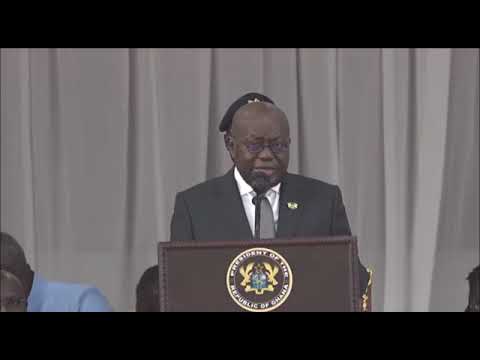 President Akufo-Addo has asserted that Akonta Mining Company Limited is not involved in any illegal mining anywhere in Ghana currently.

The President said this at the 28th National and 16th Biennial Congress of the National Union of Ghana Catholic Diocesan Priests Association held in Koforidua on Wednesday.

Many groups and individuals have demanded punitive measures against the company and its owners, led by the Ashanti Regional Chairman of the ruling New Patriotic Party, Bernard Antwo-Boasiako, also known as Chairman Wontumi, for alleged illegalities perpetuated by the company in the Tano Nimiri Forest Reserve in the Western North Region last year.

But President Akufo-Addo while responding to the Chairperson of the event, Ing. Ken Ashigbey’s question of why Chairman Wontumi continues to walk a free man when he should be investigated and prosecuted, said Akonta Mining is not engaged in any illegality as we speak.

“Let me respond briefly to the chairperson on the issue of illegal mining. I want to assure him and all of you that Akonta Mining is not engaged in any illegal mining anywhere in Ghana as we speak.“Further, the Ministry of Lands and Natural Resources has through the agency of the Forestry Commission, with the assistance of the military, made the effort to cordon off all 294 sites of forest reserves in the country and rid them of illegal mining as we speak.”

The Company, which belongs to New Patriotic Party’s Ashanti Region Chairman, Bernard Antwi-Boasiako was stopped from mining in the Tano Nimiri forest reserve in October 2022 by the Lands Ministry.

The OSP lists some of the cases to involve former Minister of State at the Finance Ministry, Charles Adu Boahen, whose case was referred for investigation by President Akufo-Addo following Tiger Eye PI’s documentary Galamsey Economy; as well as a probe into the estate of the late New Patriotic Party kingpin, Kwadwo Owusu Afriyie, aka Sir John, which is alleged to contain the controversial bequeathing of portions of state lands at the Achimota Forest in Accra to his family members.