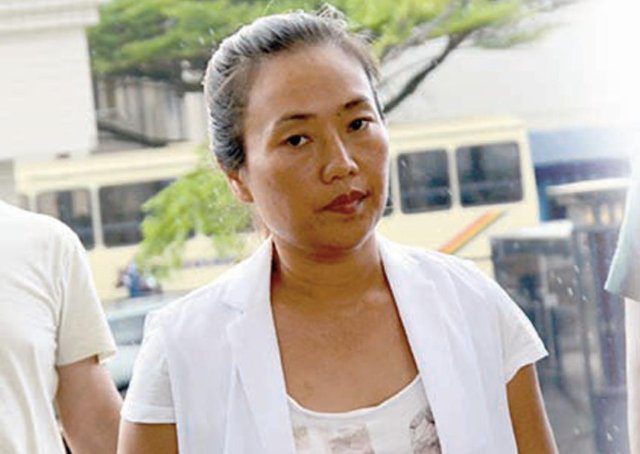 A cocoa farmer at Denkyira Domenase near Aboabo in the Central Region Region Albert Appiah has told the High Court in Accra that galamsey kingpin Aisha Huang destroyed three acres of his farmlands with her illegal mining activities.

The farmer who is the 4th of the 11 witnesses the state has earmarked to parade tendered his witness statement as his evidence in chief while being led by the Director of Public Prosecution, Mrs. Yvonne Atakora Oboubisa.

Aisha Huang has pleaded not guilty to four charges including engaging in illegal mining in the Ashanti Region, and re-entering Ghana without a permit from the Controller General of the Ghana Immigration Service, and has been remanded into lawful custody whilst the trial continues.

Testifying as the Fourth Prosecution Witness in the case, the farmer said the accused had contracted other Chinese nationals to engage in illegal mining.

He said, upon invading his farm, he asked Aisha Huang to compensate him with GHc15K for each of the three acres of his farmlands destroyed but she refused and they later agreed on a fee of a little over GHc8k.

The Witness told the court that, the land on which he farmed belonged to his great grandfathers who were also farmers and farmed that land and that, sometime in 2016, he noticed that a number of Chinese and Ghanaian nationals were mining within Asuogya Nwomaso, near Bepotenten.

The Witness told the court that, in 2016, the accused person approached him in the company of James Ogbey, her employee, and others and indicated that she wanted to extend her mining activities to his land.

“To my understanding, all the mining activities of the accused person were within the concession of Nana Kwesi Prempeh, whose company is called Volta Resources.

“Aisha informed me that she had been granted a permit by the Chief of Akwamu, the same Chief who granted Volta Resources their concession. Even though I heard that Volta Resources had given its concession to the accused person, I later learnt it was not true,” the Witness told the court.

“It was late in the day and as such we could not negotiate the price so I proposed we all meet at Aisha’s mining site the following day. I went to my farm the following day and realized the accused person and her workers had uprooted and destroyed a section of my oil palm plantation without the sale price being agreed upon,” the farmer told the court.

According to Albert Appiah, “This development infuriated me and I confronted the foreman of the accused person” and “I teamed up with another farmer, Kwabena Mensah Nkegbe, who had also not been paid for the destruction of his farm to go to Kumasi to meet Aisha to negotiate for the payment for our farmlands.

“We were led by James Ogbey and the foreman of the accused person to Kumasi, Ahodwo to meet with the accused person.I was accompanied by my senior brother Kofi Anane. We met Aisha at her office at Ahodwo, Kumasi,” he told the court.

“I personally demanded GHS15,000.00 per acre for my farmland because she destroyed my farm when negotiations had not been finalized,” he said. “Aisha did not accept my proposal and we finally agreed on a little over GHS8,000,00 per acre.”

The Witness said, “the only water body around my farm is the Nkyingo river which is currently in a deplorable state as a result of the mining activities of the accused person and her workers.”

“They then invited all the farmers who lost their farms as a result of the illegal mining activities of the accused person. I was accompanied to the Immigration office at Obuasi by one Kweku Manu where I together with the said Kwaku Manu gave our statements.”

According to EIB Network’s Legal Affairs Correspondent, Murtala Inusah, counsel for the accused has started his cross-examination of the witness. The case has been adjourned to Thursday, December 1, 2022, for further cross-examination.