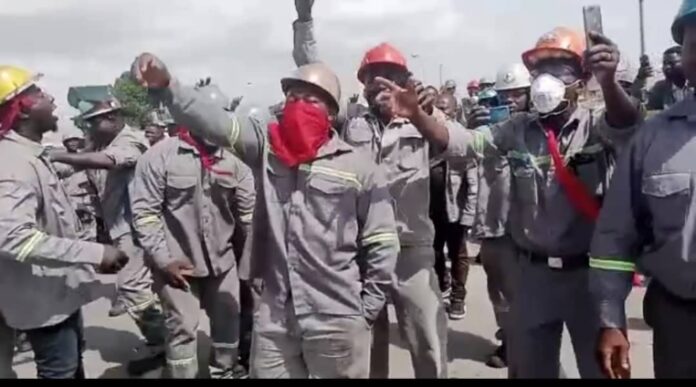 [adrotate group=”2″]
“How will someone you work for instead of him seeking your welfare will rather want to damage you or let you look stupid in the public eye. The issue is not what they put out. We went for negotiation and we agreed in principle that they were going to restore us, which is a policy in VALCO. Which has to do with the dollar-to-cedi ratio.

“For instance, if my salary was Ghc1,989 which would be $337 dollars. It means that now that the dollar has shot up to Ghc12 our salary should automatically increase. So this has been the norm since 2010 between management and us since the restoration policy was instituted. Then management scrapped it without letting us know,” Mr. Nunekpeku explained.

He continued: “So when we raised the alarm or concerns to the Chief Executive Officer, he promised us that he was going to work on it. That he has instructed the Human Resource Director to work on it. Later we met the Board and they were also of the opinion that that was the best way to go and that it will be addressed in September.”

Mr. Nunekpeku added that mathematically the increase of their salary cannot be 22 percent as management has put out in the public domain.

“It is 57% restoration, in fact asking for reduction in the first place is wrong. Because going forward quarterly whenever the dollar appreciates our salary in cedi must also change,” he added.