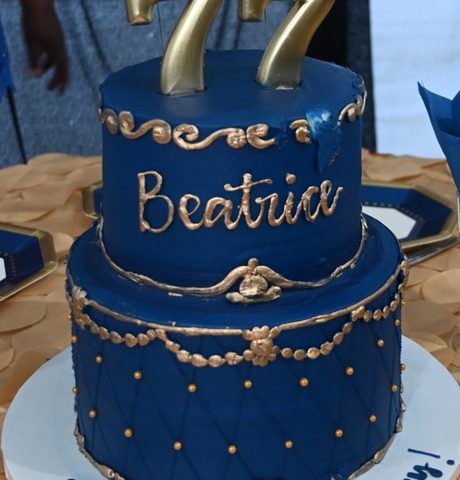 Year after year, there’s one day that should revolve entirely around you—that is, your birthday! It becomes more interesting when one has kids who are known and active in the community and a son-in-law who is popular and one of the community’s leaders. The culmination of all the above turns a small “house party” into a mega celebration. That was the case of Ms. Beatrice Adjeley Lomo, popularly called “grandma.” Her two daughters and son-in-law were prepared for a small get-together to celebrate Ms. Lomo’s 77th birthday.

Unexpectedly, the turnout was huge. Members of the Presbyterian Church of Ghana (PCG), Trinity Congregation, were there in their numbers to support one of their own,  as well as loved ones and friends of the family. Notable of mention are Catechist Smart Owusu-Aduomi; Elder Christiana Osei Wusu; Dr. Mark Kutame, former President of the Ewe Association and V.P, Ghana National Council; Mr. Steve Dei, Former President of the Ewe Association, and others. The celebrant elegantly dressed to suit the occasion. Catechist Martin Anom of the PCG, Trinity Congregation, offered the opening prayer. He asked the good Lord to bless the celebrant with a long and healthy life. Elder Christiana Osei Wusu blessed the cake .

It was a party where everyone ate and drank what they wanted. Deejay Chris did not disappoint. He dished out the best music in his arsenal to keep the revelers dancing all evening long. The lenses of www.sankofaonline were there to bring these pictures to our worldwide audience.