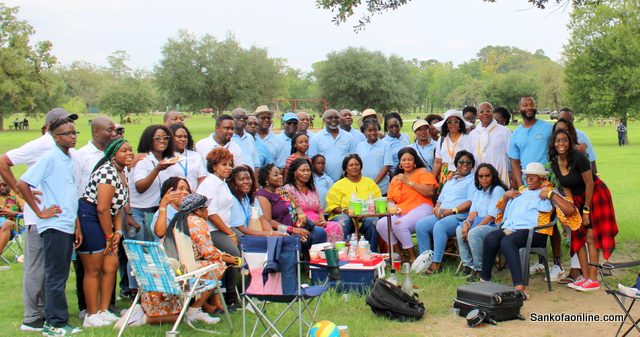 This year’s Convention was hosted by the Ewe Association of Houston under the Presidency of Mr. David Abusah, aided by his able Executives. The event was attended by an estimated six hundred (600) guests from the USA, Canada, Europe, Ghana, Togo, and Benin and watched by hundreds of thousands of people worldwide on social media outlets such as CEANA’s YouTube/Facebook, and other media platforms. Over $100,000.00 was raised.

Members of all the nineteen (19) constituent Associations of CEANA graced the occasion. The Convention officially opened on Friday morning, September 2nd, with a board meeting of the CEANA Council of Representatives (COR). Dr. Tsatsu E. Nyamadi, President of CEANA, chaired this meeting and all the weekend’s events. The morning’s official business included a review of operations for the past year and the election of new executives to lead the organization for the next three years.

As part of planning, Convention attendees had the privilege of touring the NASA Space Center in Houston, Texas, on Friday morning.

Friday evening was capped with well-choreographed Ewe cultural performances and a fashion show.

Even though Thursday September 1st is considered an arrival day, folks who arrived were treated to Old School 70s, 80s music and dance.

On Saturday morning, September 3rd, a procession of delegates and guests from the various Associations were ushered into a general conference, amidst jubilation and celebration.

CEANA President, Dr. Tsatsu Nyamadi, then took the helms and delivered the state of CEANA address. He thanked the CEANA Council of Representatives (COR), as well as the leadership of the various Associations and various committees who have kept the work of CEANA going despite the Covid-19 pandemic. Dr. Nyamadi noted that the dreadful COVID-19 pandemic did not stop the resiliency of the Ewes. Despite the pandemic CEANA found new ways to hold the Convention for the past two (2) year and used the opportunity to reach out to more people across the globe and to raise more funds to honor CEANA’s commitment to implement development projects in Eweland.

The President congratulated all the 19 Ewe Associations for their unity, zeal, determination, and purpose that have kept the CEANA organization alive and thriving wonderfully all these years. Dr. Nyamadi praised all the donors for the following projects that have been recently completed: Information and Communications Technology (ICT) Library in Lolobi, Ghana; a three (3) classroom block with offices at Davou, Togo; and a pedestrian foot bridge at Agordoe, Ghana. He also thanked them for the ongoing project, which is a Health Center and residential staff quarters in Adutor, Ghana. CEANA also awards scholarships (since 2002) to students in Ghana, Togo, and Benin every year. Over 300 scholarships have been awarded to-date and glad to acknowledge that one such scholarship recipient, a female, was one of the engineers on the Agordoe bridge project.

Dr. Nyamadi saluted our heroes and heroines we lost over the years including our beloved brothers and sisters who we lost prematurely to the pandemic. He went on to say that the Ewe community and CEANA will forever be indebted to them for the time they spent with us. He led the Convention attendees in observing a minute of silence in their honor.

Earlier in a welcome address, Mr. David Abusah, the President of Ewe Association of Houston (EAH) enumerated some of the challenges they faced when planning for the first in-person CEANA Convention after the Covid-19 pandemic including a record high level of inflation in the US and all over the world. Despite these challenges, he did not hide the excitement of EAH to host this memorable Annual CEANA Convention for the third time in the Bayou City. He remarked on the recent popularity of Annual CEANA Conventions and paid growing tributes to some of the flagship CEANA programs and introduction of new CEANA policies that was initiated during those times that the CEANA Convention was hosted here in Houston. In conclusion, Mr. Abusah recommended the formation of CEANA Book Club to be supported by all CEANA Convention attendees to bring at least one (1) book per person as a donation. These books would be collected and shipped for distribution to schools and libraries in Eweland. This project, if well managed, can serve as a continued supply chain of books to schools and libraries in Eweland.

Professor Delanyo Adadevor, the founder of the International Leadership Foundation (ILF) spoke on the topic ‘The Ewe Advantage and Ghana’s Development’ on Saturday morning. He gave a brief history about the origin of Ewe people and the Ewe religion worldview. He also dwelt on the concept of God among the Ewe tradition. According to him, the common religion, language, culture, and history have resulted in an identity that has been strengthened by shared values.

Mr. Tsoenam Akpeloo, CEO of SUKU Technologies and Greater Accra Chairman of Association of Ghanaian Industries (AGI) also spoke. He provided the audience with great reasons why we should invest in the Volta Region. Among them are: The Region is a strong resource pool, a cohesive private sector, stable democratic climate, and an educated workforce. In a riveting presentation. He named the following areas as potential sectors for investment: tourism, agriculture, technology & employment, and micro-finance.

Dr. Kenneth Barning, Assistant Professor at Baylor College of Medicine, Houston, Texas, USA, and board certified by the American Board of Family Medicine, spoke on the theme “Importance of Preventive Health Care in Eweland”.  He called on all attendees to take healthcare seriously as it is one of the things, we humans have control over.

The Saturday evening banquet showcased the unique culture of Eweland, with a procession of chiefs, dignitaries and other traditional leaders from the USA, Canada, Benin, Togo and Ghana to the function. Among them included the Guest of Honor, Volta Regional Minister, Hon. Dr. Archibald Yao Letsa; Minister for National Security of Ghana, Hon. Albert Kan-Dapaah; Member of Parliament (MP) for Ho West and Chairman of the Volta Regional Parliamentary Caucus, Hon. Emmanuel Bedzah; Member of Parliament (MP) for Hohoe and Minister for Railways Development for Ghana, Hon. Peter Amewu; and Togbe Agbelom, Chief of Salo Volta Region (V/R) of Ghana also known as Nana Ofei Asamani I Nkosuahene of Akwamu Traditional area.

Hon. Dr. Letsa delivered the keynote address. He reiterated the need for multi-stakeholder involvement in our insatiable quest to build a resolute preventive healthcare system. He dwelt on the lack of adequate modern educational resources necessary for the proper education of the youth of Eweland. He cautioned that often, individuals want to get colossal amounts of resources before they deem it fit to support a worthy course. As a result, that good intent eventually becomes the obstacle if one is not careful.

Hon. Kan-Dapaah spoke on the need for peace and security in the development of the Volta Region. He reaffirmed the need for unity and peace among all Ghanaians and the West African sub-region. There were also greetings from all other MPs present.

Togbe Agbelom, who is also the CEANA representative in Ghana praised the CEANA team spirit and togetherness from all Ewes across the USA and Canada and their resolve to help in the development of Eweland. He urged other Ewes across the world to emulate what CEANA is doing.

The CEANA signature annual fundraiser and solicitation for membership for the CEANA Star Club drew a lot of contributions and pledges from guests in attendance and those participating virtually.

The evening was rounded off with the induction of new Executives and the official transfer of the mandate to host the next Convention in Atlanta, Georgia, to the Ewe Association of Georgia, Inc., led by its President, Dr. Kojo Akabua. Dr. Akabua was also sworn in as the next 2nd Vice President of CEANA.

In the afternoon, Convention guests converged at the CEANA Convention Cookout, which featured dishes from Eweland amid agbadza, Ewe highlife and borborbor tunes. Sunday evening was crowned with another signature event – “Mise Gli Loo – Toli Night,” a rendition of a cultural pastime of evening storytelling.

On Monday, September 5th, 2022, Convention delegates and guests departed to their various home destinations across North America, Ghana, Togo, Benin and Europe with a renewed sense of unity, friendship and purpose.

The following resolutions/actions were adopted:

1. Approval of Ewe Association of Georgia, Inc. as the host of the 2023 CEANA Convention.

On behalf of the CEANA Secretariat and the CEANA Council, President of CEANA, Dr. Nyamadi congratulated the delegates, guests, and Ewe Association of Houston for hosting and making CEANA 2022 a resounding success.