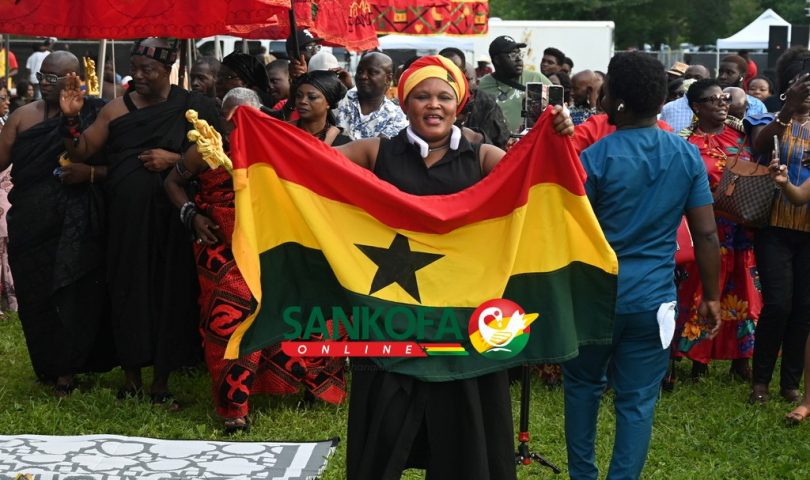 The historic three-day Ghanafest 2022 event in Chicago promoted Ghanaian culture and heritage through the exhibition of arts and crafts, music, dancing, food, parading of chiefs and queens, and many others. The celebrations ended on Sunday, July 31, 2022, with a soccer match between Ghana and Liberia. Unfortunately, the festival was absent for two years due to the COVID-19 Pandemic. Still, it never lost its fun and welcoming atmosphere as it was a very successful event, except for the absence of a supporting cast for the celebrated musicians from Ghana.

The Ghana National Council of Metropolitan Chicago, GNC, organized and funded the festival for the past 34 years.

The three-day festival was a lineup of enthralling activities which showcased various aspects of Ghanaian culture and heritage. The festivities started on Friday, July 29, 2022, with Corporate Excellence Dinner Award. The event was sold out as members of the community learned about the quality of dignitaries in attendance. They include renowned leaders in the African community. Present were Ghana’s Ambassador to the USA, H.E Hajia Alima Mahama; Minister for Tourism, Arts and Culture, Dr. Mohammed Awal; H.E Ambassador, Dr. Arikana Chihombori-Quao, Founder, President, and CEO of ADDI. In addition, current headline sensation, politician, businessman, and Presidential hopeful, Honorable Kennedy Ohene Agyepong, MP (NPP) Assin Central. His presence captivated the audience with his frank talk. Efforts to get tickets at the last minute were futile as the planners did not anticipate a large attendance.

The D-Day, Saturday, July 30, 2022, saw the talents and famous artists such as D-Black, Fameye, Kofi Kinaata, Akwaboah, and lady Sefa on stage. Unfortunately, their performance was lackluster as the organizers did not arrange for a supporting band to assist them. During the virtual shows, the parade of Chiefs, queens, and members of the various traditional areas of Ghana that had been missing for the past two years were sentimental and cheerful, as each group tried to outperform the other. The weather was ideal and perfect. On display was an aesthetic, artistic, and elegant depiction of culture with pomp and pageantry.

In his keynote address, Kennedy Agyepong urged the Ghanaian communities abroad to come home and invest. He warned that they should however beware of family and friends who may take advantage of them. He urged the organizers to make the event larger by inviting other Ghanaian communities across the USA to join them in promoting and celebrating the Ghanaian culture. He promised to help the organizers by promoting the festival across the USA and Ghana. He pledged that if elected President of Ghana, he would reduce corruption to the barest minimum. Supporters and sympathizers of Mr. Agyepong escorted him to the podium amidst dancing and singing.

Dr. Mohammed Awal, Minister of Tourism, Arts and culture, thanked the organizers for inviting him to such a spectacular event. He appealed to Ghanaians abroad to come home and invest when he said, “Do not only send your remittances to Ghana but also come home and do business”  He thanked Ghanaians abroad for their remittances to friends and family home.

The President of the GNC, Mr. Paa Kwasi Sam, urged community members to patronize the Akwaaba House, an investment by Ghanaians here in the Chicago area, to serve the community’s event location needs. A place they can call home. In gratitude to past leaders of the GNC, the President said that Ghanafest, undoubtedly the most outstanding African cultural exposition in the diaspora, started 34 years ago! So it will be appropriate to thank our predecessors, whose generational vision has seen a neighborhood festival metamorphose into a standout event. In conclusion, Paa Kwasi said, “Ladies and gentlemen, this being my last speech at Ghanafest, I would like to thank all those who supported me during the past six years. I urge you to continue to support the next leaders of the council. Please, we ask for your forgiveness if we have offended anyone during our term in office. We have also forgiven anyone who might have offended us during the past six years.”

Fans of the festival would not miss out on the celebrations this year. I run into Mrs. Tasha Gardner, who has attended every Ghanafest since 2001. Unfortunately, she could not join the virtual celebrations but was glad the in-person festivities were back. She thanked the organizers for a well-planned event. First-timer, Obed Antwi-Baidoo, a first-year student at Notre Dame University, was more than enthused. He saw the program on the school platform and would not hesitate to celebrate the culture of his kith and kinsmen and women in Chicago. He enjoyed fufu and goat meat soup, and boflot. “As a proud Ghanaian, I will definitely bring my friends to next year’s celebrations. This is an excellent cultural exposition ”, Obed firmly stated. When asked if he has seen anything like this before, he answered in the negative.

The alluring aroma from classic Ghanaian food courts spotted in the park undoubtedly led to long queues of patrons waiting to be served. These foods include kenkey, stew, fried fish, ground pepper and tomatoes, and other ingredients; waakye, rice and beans; red-red, bean stew with fried plantains. The menus also included Fried Yam, boflot, kebab, and other mouth-watering foods. In addition, arts and crafts were selling hot. Various African fabrics,  such as kente cloths, stoles, and bags, were for sale.

The last activity of the 2022 Ghanafest featured a soccer match between descendants of Ghana against descendants of Liberia living in the Chicago area. Inspired by the Presence of the GNC President, Paa Kwasi Sam, Rev. Dr. Kofi Noonoo, President of the Council of Ghanaian Churches here, and many other prominent community leaders and members, the Ghanaian team took the lead when their center forward slotted in a low cross into to back of the net. The Liberian team responded 5 minutes after the Ghana goal. Ghana again restored their lead 40 minutes into the half, but Liberia equalized before the end of the first half; ending in 2-2. Fifteen minutes into the second half, Liberia scored what appeared to be a winning goal since they took complete control of the game for the next 25 minutes. However, against the run of play, Ghana equalized 5 minutes to the end of regular play. That set the scores at 3-3 and sent the match into extra time. Urged on by their vociferous supporters, Ghana completely controlled both halves of extra time. Unsurprisingly, Ghana found the winning goal after a string of passes initiated from the left flank. After the game, the President of the GNC, Paa Kwasi Sam, presented the winners with a trophy. He proposed that future competitions include other African teams to serve as a unifying event for Africans in Chicago and the diaspora.

As usual, the legend, Nana Yaw Marfo, showed why he is called the legend. His ability to rock the crowd and exhibit enough showmanship with antics and choruses impressed one-and-all. In addition, his skills to freestyle on any music or performance over a popular banger were unsurpassed.

Rev. Dr. Kofi Noonoo and Alhaji Baba Cisse offered the Christian and Moslem prayers respectively for the success of the program. They also prayed for the Lord’s blessings and protection for Ghana and the United States.