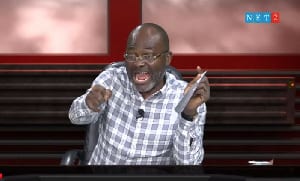 Kennedy Ohene Agyapong, an aspirant of the flagbearership race of the New Patriotic Party (NPP) says Vice President Dr. Mahamudu Bawumia will take the party to the opposition should he lead NPP in the 2024 general elections.

Kennedy Agyapong, the Member of Parliament (MP) for the Assin Central constituency, revealed in an interview with Sunyani-based Suncity FM over the weekend that no one can stop him from contesting the flagbearership elections in the party.

The loudmouth legislator stated that his research has shown that only three percent (3%) of Vice Presidents have been able to win presidential elections immediately after their tenure.

“Only 3% of vice presidents, according to my research, have been able to move directly into the presidency. I’m afraid about taking a chance like that. I’ve entered as a result,” he said.

He added, “So if NPP makes such a mistake, it is obvious that they will lose the elections. Nobody can stop me from achieving my goals. I will defeat them hands down.”

Mr. Kennedy Agyapong indicated that he is the only alternative to help salvage the current economic difficulties.

“Every government has fallen out of favour due to the global economic downturn and the confrontation between Russia and Ukraine, so why would you take such a risk? “I’ve come for that reason. People who believe it’s a ruse to get votes for Alan or D. Bawumia are mistaken,” he said.

Mr. Kennedy Agyapong further revealed some of the measures he will implore to restore the economy from its current situation. He stressed, “I’m going to run for President in style.”