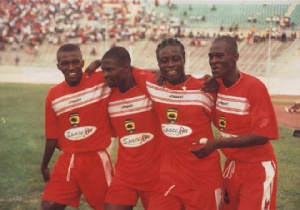 The Porcupine Warriors wrapped up the league title for a record-extending 25th time two weeks ago when they drew 1-1 at AshantiGold in an outstanding fixture played in midweek.

They received a glittering trophy and 40 gold medals for their contingent.

It is the same amount rivals and dethroned champions Hearts of Oak received after their success last term.

Asante Kotoko will wrap up their final game of the season with an away game against Accra Lions at the Accra Sports Stadium on Sunday with kick-off at 15:00GMT.