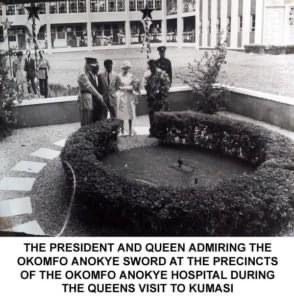 ƆKƆMFO ANƆKYE planted the AFENA or Sword that he had spiritually consecrated, firmly in the Earth with only the Shield shown above ground.

He said the Sword should NEVER be removed, because it’s firmness metaphorically, represented the firmness of the Asante nation that he had helped to establish after the victory over Dankyira, in the War of 1701.

Nana Anokye also left a prophesy: That. the immediate area of the Sword embedded in the Earth, would be the site of a future Ayaresabea, meaning Hospital. He said all that in May, 1701.

In 1952, Otumfuo Osei Agyeman Prempeh II, decided to construct a Hospital at Bantoma. Throughout our History, there had been mentions of “Okomfo Anokye’s planted Sword,” somewhere in Kumase. It was not written down, and memories fade. We forgot where the Sword had been planted.

According to contemporaneous media reports at the time, construction stopped. Otumfuɔ Asantehene was duly informed. Asanteman Council was convened. A number of Adwan and Anantwie were offered in Sacrifice and Propitiation…. the blood to cleanse whatever evil thoughts anyone had, or would conjure. It was named correctly, The Okomfo Anokye Sword.

When the initial phase of the Hospital was completed, Kwame Nkrumah, who had become Leader of Government Business after CPP won the 1951 elections, maneuvered to have it named after him. That campaign was led by influential CPP Asantefuɔ like Krobo Adusei, Jantuahs, Nana Kwame Poku (later named Ghana Akuofuohene), Martin Appiah Dankwa of Nkawie, among others.

So, Nkrumah did not get his name on the hospital. Neither did Okomfo Anokye. It was subsequently called officially, The Kumase Central (General) Hospital.

However, by default, everybody called it GEE. And, that’s because the main Architectural/Engineering Construction firm that constructed the hospital, was called Gee Walter Slater…….., of England.

After the glorious coup of February 24, 1966, The Kumase Central Hospital, was officially, and rightfully.. …., by the power of Asanteman; renamed The okomfo anokye hospital.