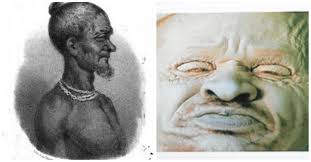 The story of Nana Badu Bonso II, the Ahanta chief from Busua, a small town veiled by coconut trees along the western coast of Ghana in West Africa was that he was court marshaled and hanged by the Dutch occupants of our land for killing two white intruders on his land! His head was cut off and sent across the Atlantic to far-off Holland. But for the work of an intrepid researcher, the head would still have remained in a container where it has been preserved in formaldehyde for about 170 years. Since then, the story was not known to any of Nana Badu II’s people and Ghanaians.

Many historians have not touched on the aspect of the country where our chiefs resisted the arrival of the Europeans long before the British arrived on our coast Indeed What makes this story enthralling is that apart from chiefs of the Asante Empire who were known to have fought the British in many wars in the days before the Gold Coast, not much is known about chiefs in Southern Ghana who fought other Europeans before that era. There are dotted folktales of locals across West Africa who resisted the invading white occupants in many forms but are not documented in any history book. The story of Nana Badu lends credence to some of these stories!

As a mark of respect, the chiefs have decided not to hold this year’s Kundum festival in honor of the slain King. We hope future celebrations would be in honor of our hero and trail blazer!

Otumfuo Badu Bonsu XV and his people might have been astounded, experienced pain, loss and other emotions that defy expressions upon discovering the despicable story about their former chief! But along and beyond the unspeakable emotions, remain the connections and bridges that we must restore for our common good. Despite the distance in time and current circumstances, our commonalities are too obvious to ignore and to bury the sacrifice and heroism of Nana Bonsu II would not serve the purpose and stand he took for the people of Ahanta and our country. Your late chief was a man of courage, a warrior, a symbol of resistance and triumph for our collective survival.

The survival of Nana Badu Bunsu’s head over the years for the present generation of Ahantan’s and our Nation to witness is a necessary testimony and gave us an important reminder of our past! The head of Nana Bonsu should have a resting place in a mausoleum for the next generations of Ahantan’s, Ghanaians and the world to see and read about. Ghanaian historians should research the story and come out with the truth of what actually happened in June 1838 to Nana Badu Bonsu II! The time Nana was killed was an era in history when white emissaries spied on villages and with or without the assistance of locals’ raid these villages and took men, women and children captive for the heinous slave trade. Indeed we sincerely believe that if these whites were on Ahanta land for peaceful purposes Nana and his people would have welcomed and treated them peacefully. That was and is what we are made of!

We strongly concur when Nana Baidoo Bonsu XV stated “We are not just celebrating the return of the dead chief’s head, we are celebrating a brave warrior who for several years had remained unsung and it is for that matter that we want to turn it into a national affair,”

To us, the story of Nana Badu Bonsu II as horrific and tragic as it may be, served a purpose in history and that history and purpose could be better preserved and served if the story and head of Nana is preserved for future generations to read and see.