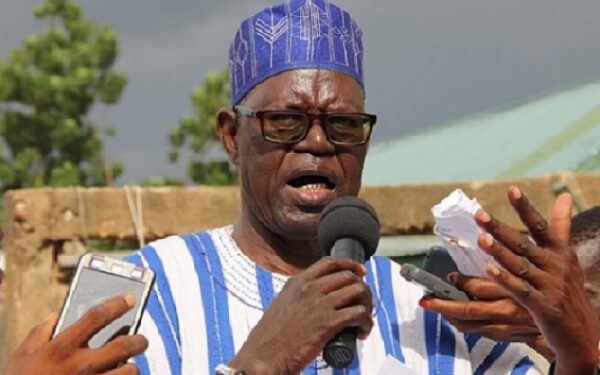 Every human being on earth made by the creator deserves some level of dignity and respect. When a whole nation of some 20 million is taken over by some armed bandits, it takes some other men to stand up to liberate them.

So was the story of the man John Ndebugre and his colleague Akoto Ampaw in or around 1990.

The passing away of former Lawyer and Lawmaker MP, John Ndebugre of Zebilla, at the young age of 72, should make most Ghanaians who love their country sit up and reflect on our nation!

Do we as Ghanaians have enough guts and love to stand up against oppression and to save Ghana, or like some of us, we are planning to cross the ocean by fair or foul means to seek greener pastures in foreign lands and abandon our land because of oppressors of our own kind?

Every nation has a destiny, like every human. The collective destiny of a nation is the collective good and bad thoughts and deeds of the members.

Can a cowardly nation survive the dangers of foreign or domestic assault?

This question was answered in the negative in the 13th Century when the mass of the people around the Niger Belt called the Ghana Empire, reputed to be one of the wealthiest nations on earth, endowed with excess gold reserves, was raided by some Arab states from the North. This was around 1235-1237 AD.

Opinions can vary but History cannot be refuted. The opinion of the great Arab traveler and writer Ibn Battutah was that the people of the old Ghana Empire seemed to lack discipline in their behavior and running of their nation-state. Obviously, it seems they were cowards also- as they did not even stand to fight the invading tribes! They just took their stuff and run southwards, all the way towards the current Location of Ghana and some neighboring states like Cote d’Ivoire and Togo.

The most important observation are:

1. The people did not stand up to fight, and

2. They would not live under the rule of the Moslem conquerors, and

3. They would rather migrate to other lands.

In the last 18 years as I move back and forth from my adopted state of California in USA to my adopted home in East Legon, Accra, Ghana, my country of birth, many thoughts and emotions go through my mind:

A. One is the emotional pain of seeing and watching a totally almost hopeless and selfish group of lawmakers and administrators, elected and appointed Ghanaians, whose sole duties seem to be to scrape and siphon and steal part of any funds they are made responsible for, to serve their personal selves and families!

B. The other is to see and watch how neglected we as a people have allowed our society to become: dirty and filthy, no planning of roads as we build our homes, no planning for supply of water and for electricity, and

C. How we the educated have become worse than the uneducated rural folks in human relationships.

It will take me too long to explain but as an Engineering, Management and Leadership author and Consultant, it hurts to see how the so-called affluent areas have lost the human collaborative spirit we used to have growing up in the Pre-Colonial times of the 1950s and the first decade after Independence.

It will be easier for me to assign blame and say the coup makers of 1966 and those they handed over power to have contributed most to the demise of the nation-state of Ghana. However, that will be too simplistic.

The bottom line is that there is a spirit in all human societies, an endemic culture, that distinguishes them from others and helps in their survival. In my first book, Leadership Concepts and The Role of Government (Danso, K.A., XLibris, New York) I analyze and explain this well.

Ghanaians have lost our spirit as a cohesive people and courage has become a rare human quality. We refuse even to stand up and challenge authority when our own money is used to pay elected and appointed officials who have now been openly reported as having accumulated debts that future generations of Ghanaians can never pay. This is simply speaking, totally selling the nation’s wealth and assets and leaving an impoverished masses behind.

Greedy and selfish politicians have sold Ghana’s diamonds, gold, bauxite, manganese, and other minerals as well as oil to the highest bidders while they collect their share for their families and secure their future, which perhaps may be outside Ghana. As the case in Nsawam exemplifies, Ghanaian land have been sold to foreigners by Chiefs, against the Constitution. The people are being driven away from their homes at midnight by paid guards.

No public officials – elected politicians and appointed local Chief executives, seem to have any love of nation anymore!

It is in this context that one day men like John Ndebugri will stand out in our history as one of the greatest men. At a time in the mid to late 1980s military dictator, Jerry Rawlings and his cohorts of the PNDC had destroyed the will and morale of Ghanaian Businessmen and driven most of them out of the country. This created hundreds of thousands of unemployed till we see today. Many left the country and those outside could not return. It took men like Lawyers John Ndebugri and Akoto Ampaw to stand up and call for a constitutional government.

Coincidentally some of us in the US, Canada, and Europe had started and been involved in massive media campaigns for almost a decade. This Ndebugri-Akoto Ampaw declaration was a big relief. We sensed that the end of the decade-long oppressive and unconstitutional rule of Jerry Rawlings and the PNDC was coming to an end. Today all that is left is for the Youth to learn to stand up! They have a right to! It is their duty to save the land of their birth!

May the soul of the brave man and lawmaker John Ndebugri Rest In Peace till the next time and perhaps life yonder.