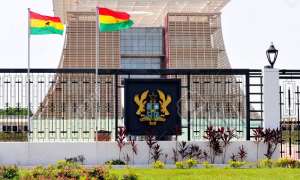 Applying austerity measures in reviving an ailing economy is not only about suffocating the people with more taxes in a bid to raise more revenue.

Very little the Akufo Addo government appears to be doing and or communicating as to how it intends to apply other measures including expenditure cuts as a major way to save the economy.

According to Hon Fifi Kwetey, the NPP/Akufo Addo Government has made a fetish of an IMF program hence finds it more than difficult to return there and therefore seemed to have settled for the most unpopular decision; i.e. imposition of the 1.75% E – Levy which Ghanaians are totally opposed to.

This observation is based on the government’s belligerent posturing on the controversial E – Levy, doing so at the detriment of all other sound measures.

It beats my imagination that at a time the economy is more than distressed, the 2021 budget allocation to the Office of Government Machinery (OGM) is a whopping Gh3.13 billion.

What justification do we have for such a huge and unprecedented allocation for OGM when critical agencies under it (OGM); Internal Audit Agency, MASLOC, etc who get very little for their activities or Ghana AIDS Commission, National Population Council, Millennium Development Authority, etc who heavily rely on foreign donors for their major activities?

The least allocation made to the OMG under the Nana Akufo Addo government was Gh1.56 billion in 2017.

Now, that the government is unable to find Gh6.7 billion to save our ICU confined economy but has a whopping Gh3.1 billion for OGM to spend, reveals where the government’s true commitment is.

The records also show that the Akufo Addo government the past 5years have allocated Gh12.88 billion to the OGM.

Also of interest, until the time that the National security Minister ‘assumed ownership’, claiming that making Presidential travel budgets public bother on national security, what we used to see was that the budget was always captured as part of the OGM allocations.

A typical example is the Gh62million Presidential travels budget in only 9 months in 2019.

The over Gh25 million also spent on luxurious private jets in less than 4 months had been detected through effective tracking and monitoring by industry players and the hard-working Minority in Parliament.

That aside, the government’s misapplication of our $10million as seed money (land, money, etc) for the $200million National Cathedral (misplaced priority) project is also fresh in our minds.

From the foregoing, compared to the introduction of a draconian, repressive, unfair, anti-financial inclusion E – Levy,

it is very clear that prudence and expenditure cuts could better save this economy.

(The writer is News Editor, The Catalyst Newspaper and an Advocate at SDDDF-Africa)