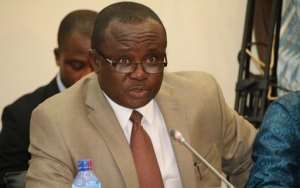 3G Media Group proudly announces that Hon. Joseph Osei-Owusu aka Joe Wise; First Deputy Speaker, Ghana’s Parliament to be honored at the Special 10th edition of 3G Awards in the USA. He is a Lawyer, and Politician being the Member of Parliament for the Bekwai Constituency, Ashanti Region. Hon. Osei Owusu historically was elected the First Deputy Speaker of the 7th Parliament of the 4th Republic and re-elected to that position for the 8th Parliament. He first became an MP in 2009, after convincingly winning the election.

Philadelphia-based Rosette Multi Service LLC is the parent company of 3G Media Group and its Chief Executive Officer, an American is; Evangelist Charles Nimmo Ntiamoah-Mensah aka Mr. CNN. US-based Media Mogul. The event is also on the heels of the media personality cum Evangelist celebrating multi-anniversaries code-named; 21-13-12-10-1; 21 years in Media/Showbiz, 13 years of publishing the 3G Magazine 12 years of organizing the 3G Awards, 10 years of operating the Rosette’s Multi-Service and Food Supermarket, 1-year – topping its first anniversary of hosting “The CUMIEES Show” on 3GTV which is shown live on Facebook.com. CUMIEES Stands for; Captivating, Uplifting, Motivating, Empowering & Exalting our Savior Through Worship.

Hon. Osei-Owusu has worked as a lawyer for 29 years in Ghana after being called to the bar in 1990. He started his career in the chambers of Yaw Barimah & Co and later joined George Sarpong Legal Services where he later rose to become Assistant Head of Chambers. He later became Chief Executive Officer (CEO) of the Driver and Vehicle Licensing Authority (DVLA) a political appointment he got during the tenure of former President; John Agyekum Kufour.

Hon. Osei-Owusu had his basic education in his hometown, Bekwai. He had his O-level secondary school education at Juaben Secondary School in Juaben in the Ashanti Region and his A-level in Wenchi Secondary School. He then went on to have a Bachelor of Arts (BA) Classics and Law from the University of Ghana, a Barrister of Law (BL) from the Ghana School of Law, and an Executive Master’s degree in Governance and Leadership from the Ghana Institute of Management and Public Administration (GIMPA).