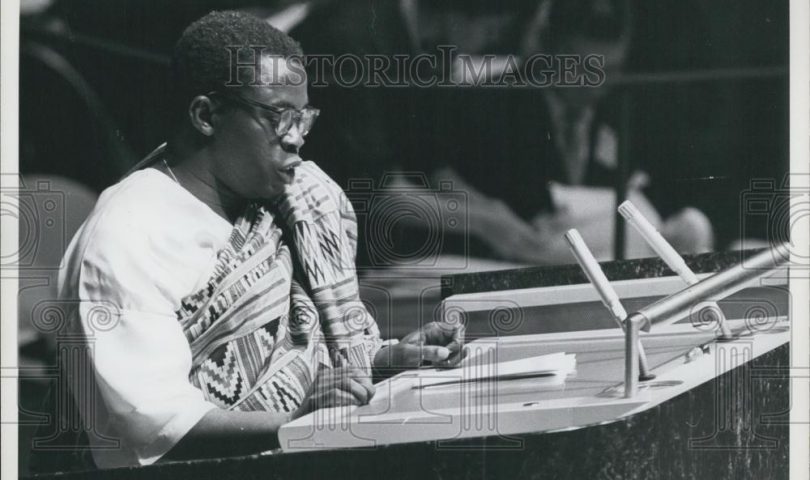 ‘’On our arrival at Accra, the person who came up to the aircraft to greet me was Krobo Edusei, the minister for presidential affairs. He had gained notoriety as a corrupt minister who had bought himself a golden bedstead, a stiry publicized in the world press. Nkrumah defused the scandal by restricting Krobo’s portfolio to looking after government hospitality. On my second night in Accra, he took me to a nightclub in Accra. He proudly announced that he was the owner and that all VIPs would enjoy their evenings there.

I was the second guest to be entertained on a beautiful yacht that had been imported fully assembled from Miami. They told me it had been transported by rail and floated n the lake. Accompanying us on board were krobo Edusei and Ghana’s minister for foreign affairs, Alex Quayson Sackey, a well-educated and well-spoken man. When we were cruising on the lake and having cocktails and canapes on deck, Raja asked Krobo who had made his beautiful safari suit. Krobo replied, ‘’My tailor shop in Kumasi. You must visit it one day and I will make a suit for you like mine.’’ He then spoke of his other activities. He used to be a 30bob (US$4) a week postal clerk; now he had two sons educated in Gevena, Switzerland. A man he said, must have ambitions. Quayson sackey, a sophisticate who had been president of the UN General Assembly, looked most unhappy and uncomfortable. He valiantly tried to steer the conversation away from Krobo, but Krobo was not to be deterred and we were regaled with one hilarious tale after another. I wondered what would happen to these two countries. They were then the brightest hopes of Africa.

One month later, on 24 february, as Nkrumah was been welcomed with a 21-gun salute in Beijing, China, an army coup took place in Accra. My fears for the people of Ghana were not misplaced. Notwithstanding their rich cocoa plantations, gold mines, and High Volta dam, which could generate enormous amount of power, Ghana’s economy sank into disrepair and has not recovered the early promise it held out at independence in 1957.

I was not optimistic about Africa. Unlike India, Ghana did not have long years of training and tutelage in the methods and discipline of modern government.’’

Sika bought LKY’s book for me about 5years ago. Honestly, I read only chapter 23 ‘’Inside the Commonwealth club’’ which featured prominently, his visit to Nigeria and Ghana in January 1966. It is extraordinarily sad to read LKY’s assessment and prognosis for Nigeria, Ghana and Africa as a whole.

Three days into his visit to Ghana, the Nigeria coup happened. One month after he left Ghana, Ghana coup happened. He was not surprised both coups happened. In fact, he had the premonition that military take over was a real possibility. My fears for the people of Ghana were not misplaced, he said. In January 1966, our economy had fallen into disrepair in spite of our bright future at independence. When I say, Ghana was dead on arrival, people complain I am too harsh on Nkrumah. LKY agreed with me la.

Krobo was “uneducated”, undiplomatic, and notoriously corrupt. How did this man find his way into a cabinet and into a prominent portfolio as the minister for presidential affairs? How could this man be the one to welcome a 1st class Cambridge scholar and Prime Minister of a sovereign state? Krobo represented everything that was wrong with politics, then and now – be a sycophant and your notorious corruption would be swept under the carpet. Diplomatic LKY took a swipe at Nkrumah’s tolerance of corruption from the mediocre minds who deified him.

No matter what I think about Nkrumah, he was the greatest propagandist that ever lived in Africa. Even, the super smart LKY was deceived about the might of Akosombo. Late LKY, Akosombo’s installed power capacity is only 1020 MW. In 1966, Ghana’s population was 6.5m. Today, the population of Singapore is 5.5m and your installed power capacity is 12 600 MW, more than 12x the power of Akosombo. Almost 56years since your visit, our installed capacity is a meagre 4100MW for 30.7m people. We are almost 6x your population but our maximum energy capacity is less than a 3rd of yours. Actually, our operational capacity is around 2400MW (60% of the maximum capacity). Yesu Kristo!!

LKY, some people believe that Nkrumah’s years represented our ‘’Golden Era’’ I know you would strongly disagree with them. According to you, in spite of all the resources we had (and continue to have), which you did not have, Nkrumah managed to sink our economy into the bottomless pit.

Ghana is the only country where the cause is celebrated as the cure. We are sinking further in the bottomless pit.

Your deepest cut is where you diplomatically inferred that we were inadequately trained, indisciplined and aliens to modern government. Sir, nothing has changed in Ghana ooh. The indiscipline and impunity are now at suprasonic level. Some believe ‘’Self-government now’’ was the best slogan ever but you think it was the most foolish slogan. You believed a longer period of tutelage would have been better. LKY was a “strange” man. He never blamed colonialism for any problem or challenge. In fact, he believed there was a lot we could have learned from the colonialist. We are still blaming others for our problem. We were one of the first in the Commonwealth to gain independence (1957) and you were one of the last (1965). The first shall be the last, and the last shall be the first said the Sage, 2000years ago.

Some of us have lived in and with modern government and have managed to fuse its best elements with the best practices of our traditional governance system. We call the new system Afremocracy – democracy brewed in the African pot aka Political Osibisa. Please, wherever you are, be optimistic about Ghana and Africa. I agree with you, way back in January 1966, Ghana was in disrepair. Now, it is in total coma, but the 5th Republic is coming to rescue, resuscitate and restore our country. Please, reincarnate in my country, so that you see the reformed Sikaman  filii.