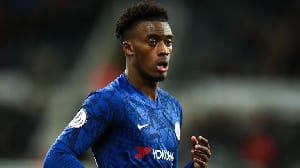 The winger has Ghanaian parents and his father, Bismark Odoi, played for Ghana Premier League giants Hearts of Oak in the 90s before relocating to England.

Despite already playing three times for England, a change to FIFA’s eligibility rules means he can still switch to Ghana in 2022.

According to a report by the Daily Mail, the 20-year-old has grown disillusioned with the England FA over his chances of playing at the 2022 World Cup.

He is, therefore, said to be seriously considering playing for Ghana now, with other young talents currently favored by England boss Gareth Southgate.

“The 20-year-old has become disillusioned with the FA after being dropped to the Under 21s since he made history by becoming the youngest player to make a competitive appearance for England, in a European Championship qualifier against the Czech Republic two years ago,” the Daily Mail reports.

“The situation has been exacerbated by the rapid rise of other attacking players such as Bukayo Saka, Jadon Sancho, Phil Foden, and Jack Grealish.”

The winger has Ghanaian parents and his father, Bismark Odoi, played for Ghana Premier League giants Hearts of Oak in the 90s before relocating to England.

He paid a courtesy call on President Nana Akufo-Addo at the Jubilee House, where the possibility of a nationality switch was discussed.

He also met with Sports Minister, Mustapha Ussif, and the President of the Ghana Football Association (GFA), Kurt Okraku.