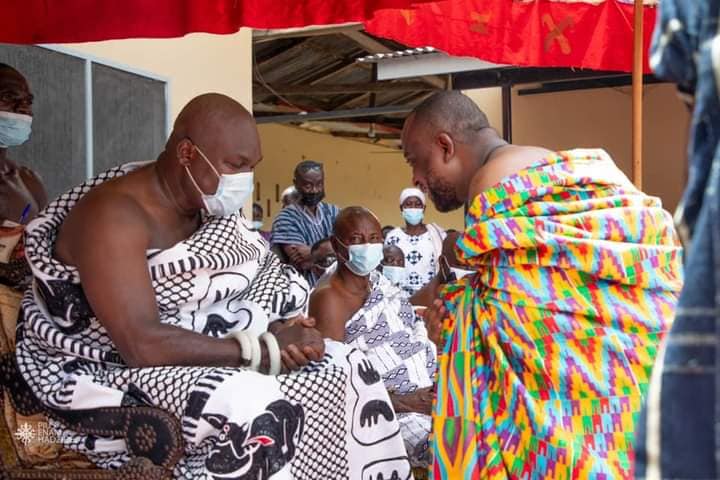 September 19 2021 Kwamu: The Chief Executive Officer (CEO) of the National Youth Authority (NYA), Pius Enam Hadzide, joined Odeneho Kwafo Akoto III, Akwamumanhene, Nana Afrakumah II, Akwamumanhemaa, the Chiefs, and people of the Akwamu Traditional Area to celebrate Akwasidae. The event was also used to welcome his Royal Majesty, Odeneho Kwafo Akoto III, back from Costa Rica, where he attended upon the invitation of the United Nations, activities to mark People of Black Descent Day. The NYA CEO seized the opportunity to show appreciation to Odeneho for his continued guidance and support, and assured Odeneho, in particular, Akwamu and Asuogyaman in general, of his unalloyed commitment to the development of his beloved Constituency.

Pius taught Physics and Mathematics in the Akwamuman Secondary School and later worked with the President’s Special Initiative on Distance learning (PSI-DL) as subject coordinator for science. Before he became the NYA CEO, Pius Hadzide featured prominently in Nana Addo’s first term initially as a Deputy Minister for Youth and Sports and was later reshuffled to the Information Ministry. As a deputy minister of information, he represented President Nana Addo at the most spectacular Ghanaian cultural festival in the diaspora, Chicago’s Ghanafest, in 2019. In Chicago, honorable Pius Enam Hadzide became the toast of many attendees of the festival when he wowed them with with his impressive dance moves.