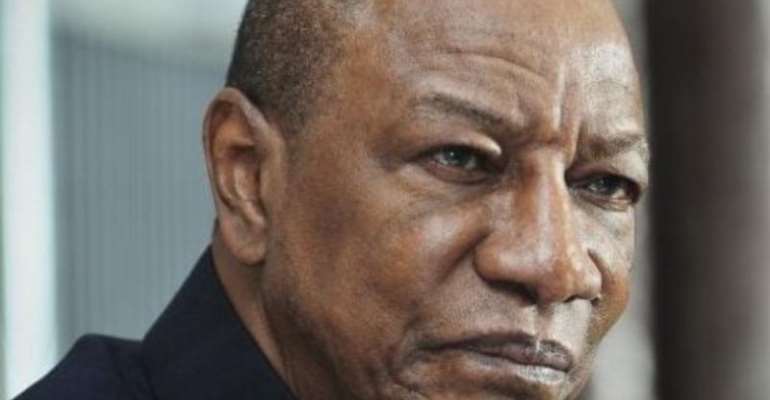 The embattled former Guinea President has been a veteran opposition leader, a human rights professor, a political prisoner, and a star in Guinea political landmark. Alpha Condé came to the limelight in 1993 and lost 18% and once again run in the 1998 election and lost to Alasana Conte, who ruled Guinea from 1984 after staging coupe and won three succession elections with the last been the 2005 election.

Alpha Condé was accused of organizing a military coup against the Lansana Conté regime, though he was incarcerated in 1999, he was later sentenced in 2000 and release in 2001. After spending a brief stay in exile in France he returned to continue his political activism in 2003, although he did not contest the 2005 elections his voice gave him hope to run in the 2010 election when the military took over after the death of Lansana Conté in 2008. Alpha Condé in 2010 electoral victory remains one of the world biggest upset in an electoral contest; from obtaining 17% to 52.5% in the second round of voting to beat opposition compatriot Dialo.

He won a second term in 2015 and was expected to retire after serving constitutional 2 term limits. Alpha Condé have call for constitutional reforms in March 2020 and won a third term in October 2020. Remarkably deposed president Alpha Condé was nickname ‘‘the Mandela of West Africa” and had promised to make reforms to position Guinea on the global scale.

The admired figure who have experienced the real political environment in Africa became a dictator as he was carried away by his security command; he became more abusive and intolerant since he made constitutional reforms to go for a third term, it has been reported that over 70 activists have been killed with more than 100 opposition politicians jailed.

Alpha Condé is the first freely democratically elected president regime has been fueled with rising unemployment, nepotism, endemic corruption, political vindictiveness, and a class system that widens inequalities. In recent months he has increased budgetary allocation to the presidency and cut the allocation to the civil service.

Deposed president Alpha Condé has fallen off- track and missed the chance to cement his name in the history book of Guinea. His ascending to the seat of government brought home, excitement, and joy in Guinea, as citizens feel they have ushered the new chapter in Guinea. The interesting development of the overthrow of Alpha Condé was the fact that he established a special military unit to give him protection while engaging in suppressing opposition figures and activists. The unit is bee hailed because they do not want to be maiming their kin men for one man to enjoy power.

We must face the reality, there is no much difference with some so-called democratic leaders in Africa including Alpha Condé who at age 83 still wants to hang on power as the quest for a third term is the new agenda; Alassane Dramane Ouattara of Côte d’Ivoire; Faure Gnassingbé of Togo and Paul Kagame of Rwanda, have change the constitution to go for a third term. Others have also made reforms to remove term limits; Paul Biya of Cameroun, Teodoro Obiang Nguema Mbasogo of Equatorial Guinea since 1979, Yoweri Museveni of Uganda since 1986 and many more. The happenings in Chad and Mali have indeed made the West African sub-region politically volatile.

It is an end of an era for Alpha Condé and the Military under the command of Mamady Doubouya must take advantage of the endorsement of the Guineans to quickly engage in a healing process and return to constitutional rule. Alpha Condé will be remarked as a man who had failed in the mission of carrying Guinea to the Promised Land.