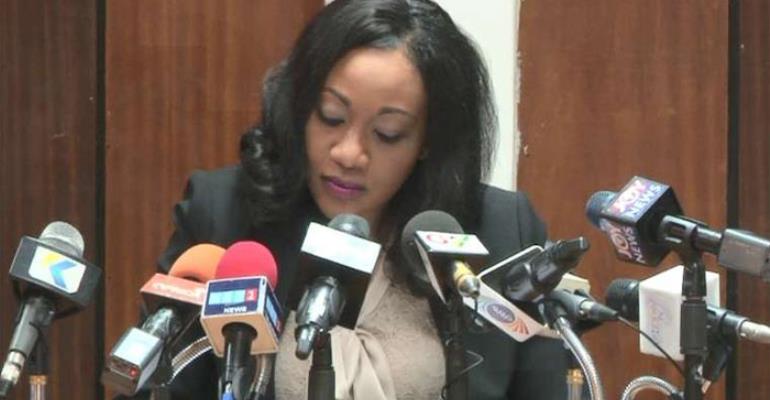 QUOTE: “The Electoral Commission (EC) has corrected the total valid votes put out during the declaration of results on December 9 [2020]. EC Chairperson, Jean Mensa, [had] declared the presidential candidate of the New Patriotic Party (NPP) Nana Akufo-Addo, as the President-elect, based on a total of 13,433,573 valid votes instead of 13,119,460.

I think that this was a mistake of the first order, on the part of the Electoral Commission.

The Commission had strong evidence that one of the major parties that took part in the general election, namely the NDC, had been using the most explosive hyperbole to describe the slightest thing that went wrong with regard to the 2020 presidential and parliamentary elections.

When the EC had failed to announce the election result 24 hours after voting had closed – as the EC had confidently predicted – the NDC had cried foul.

Dark things were being done by the EC on behalf of the NPP and that was why the EC had been unable to fulfil its own promise to declare the results in 24 hours – according to the NDC. No evidence offered – just conjecture.

When some results were declared, and the NDC saw that the NPP candidate, Nana Addo Dankwa Akufo-Addo was leading, the NDC candidate, Mr. John Dramani Mahama, made a statement which gave rise to this widely-circulated headline: “Mahama questions electoral results!”

Indeed, in an inflammatory speech, Mr. Mahama more or less claimed victory for himself and his party. He thanked the people of Ghana for welcoming “change”! Change? What change? There could only be one: according to Mahama, the people of Ghana had welcomed the change of one President for another – Mahama for Akufo-Addo!

The General Secretary of the NDC, Mr. Asiedu Nketia, also made similar remarks later at a lengthy press conference. He claimed that the NDC had a huge number of “pink sheets” that would provide evidence that the EC had been doctoring results on behalf of Akufo-Addo and the NPP. But not ONE pink sheet was produced!

Asiedu Nketia gave his own vivid account of the events that happened in the Techiman South Constituency, which resulted in the sad deaths of three people, with a number of others critically injured.

The EC knew, or should have known, that Asiedu Nketia is a first-rate fiction-narrator, whose eloquence is such that he had been named (according to himself) “General Mosquito”! Yes, he could penetrate people’s homes and perch by walls (unseen) to bring out their secret dark deeds of a political nature.

In a charged atmosphere like this, the last thing one would have expected would have been that the EC Chair would make the slightest mistake in her declaration of the results.

It isn’t the fact that the mistake did NOT affect the overall results that matters. What is important is that the EC ought to have been so thorough that NO POSSIBLE mistake could have occurred anywhere in the EC’s declaration.

For we do live in an age in which “fact-checking” has become doubly essential in everything. A man who had once been elected President of the United States of America – and had accepted the accuracy of the vote that made him President – had, four years later, been parading the media space, lying and lying and lying. The same machinery which had elected him President, was now being used to deny him the presidency. And a large swathe of the American populace believed him, irrespective of the fact that media practitioners had adopted the unusual tactic of correcting his mis-statements of fact the moment they occurred, instead of waiting to correct him later.

All this, I am sure, would have been observed by our EC members. And yet they managed to make a crucial mistake in presenting their own country’s election results. They have given Mahama and his cohorts a leg to stand on.

In her presentation, the Chair of the EC spent a long time praising her staff for the work they had done. Which was deserved – in many instances.

But the question remains, though: Who drafted the EC Chair’s final speech? Was it fact-checked by other “researchers” employed by the Commission? Who did the fact-checking?

Mind you, there was no complicated algebraic equation involved. Just taking the correct total of votes cast from the correct column and computing the percentage it represented.

It was this simple task that was botched! Yet the EC employs statisticians?

Martin Cameron Duodu is a United Kingdom-based Ghanaian novelist, journalist, editor and broadcaster. After publishing a novel, The Gab Boys, in 1967, Duodu went on to a career as a journalist and editorialist.Column: CameronDuodu