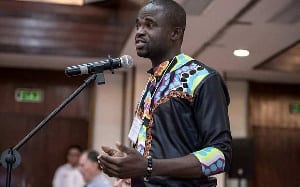 Freelance investigative journalist, Manasseh Azure Awuni, has received a fresh death threat after he published an article on the outcome of the 2020 elections.

Manasseh disclosed the latest threat on his life on today’s edition of Newsfile, which among others discussed corruption and media freedom in the year under review.

The threat was sent in an email to him on Christmas Day, a day after the article was published.

The article headlined, ‘ERRORtoral Commission and Akufo-Addo’s coup d’état’, discussed the anomalies with the Techiman South parliamentary results and the denial of the people of Santrokfi, Akpafu, Lolobi and Likpe (SALL) areas.

The two issues, if not resolved before the constitution of the next parliament, could result in what Manasseh called a “coup against the legislative arm of government.”

Someone who was not happy with the article and felt Manasseh Azuri’s article was siding with the opposition NDC on the two constituency issues, sent threatening email saying Manasseh was “lucky to still be walking a free man.”

After insults to the journalist, the sender said:

“Let me tell you Manasseh or whatever you call yourself, we the good citizens of Ghana will not sit down for a few miscreants like you to destroy that beautiful country. If condition demands that we eliminate rats like you, we will not relent on our oars to do exactly that.

“We are monitoring the present situation in the country very closely, and when it gets out of hand we shall move in swiftly to ensure that we eliminate you to bring finality to these brouhaha going on.”

He went on to make reference to the Ahmed Suale murder:

“We shall come after you very soon. I know and firmly believe that, is cowards who die many times before their death but a perceived brave journalist like you is going to fight like a warrior, fighting in the battle of power. But don’t forget Ahmed Suale’s death, let that blood which was sacrificed to pacify the spirit of our ancestors serve as a reminder for you. Always when you take a pen and write an article remember your colleagues’ death…”

This is not the first time the award-winning journalist has recceived death threats.

In 2017, he reported a death threat to the CID Headquarters, which was referred to the Cyber Security Unit of the Ghana Police Service.

That threat was in the form of a text message.

In 2019, Manasseh had to temporarily relocate to South Africa following threats against his life.

According to the investigative journalist, whose work has exposed grand corruption in government, there have been other threats that within the past four years.

In recent times, some journalists have complained about the rising state of fear and insecurity, especially after the murder of Ahmed Hussein-Suale of the Tiger Eye investigations.

Ahmed Suale had been threatened by the Assin Central MP, Kennedy Agyapong.

The legislator had put the undercover journalist’s photograph on television and disclosed that he lived in Madina. He then ordered whoever saw him [Ahmed Suale] to attack him and that he [Kennedy Agyapong] would pay.

Ahmed Suale was shot dead on January 16, 2019 in Madina near his home.

According to Manasseh Azuri, he has already made contacts with some top police officers on the matter and will formally report the threat and submit the full content of the email to the police.