CEO of the Jospong Group of Companies Joseph Siaw Agyapong

Government has canceled a $74m contract with Jospong Group of companies to provide waste bins believed to have been inflated.

The cancellation of the contract which translates to ¢355m follows Joy News investigations in 2017 by award-winning journalist Manasseh Azure Awuni.

Joy News found the procurement of one million waste bins and disposable bin liners was inflated by at least ¢130 million.

The contract awarded was in November 2016 by the Ministry of Local Government and Rural Development.

But all five companies that were awarded the contracts were all companies within the Jospong Group.

The contract was awarded through sole sourcing, with approval from the Public Procurement Authority (PPA).

A subsidiary of the Jospong Group which won one of the contracts sells a waste bin of the size quoted in the contract for 150cedis.

Also, a packet of disposable bin liners from Universal Plastic Product and Recycling Ltd costs ¢15.8 or $3.6.

Together with the waste bins, this contract appears to have been inflated by over ¢134 million or $31.1 million.

Even worse, Joy News also was found the Local Government ministry had some 150,000 waste bins for District Assemblies across the country which it has been unable to distribute.

The cancellation was contained in a letter from the Local Government ministry communicated to the businessman.

“I have been directed to invite your attention to the fact that the contracts have lapsed on account of non-performance by the contracting companies”.

The contract had been a subject of an investigation by the Criminal Investigations Department of the Ghana Police Service. A Cabinet committee chaired by the Senior minister Yaw Osaafo Mafo was also set up to review the contract.

No monies have been paid to the companies awarded the contract. 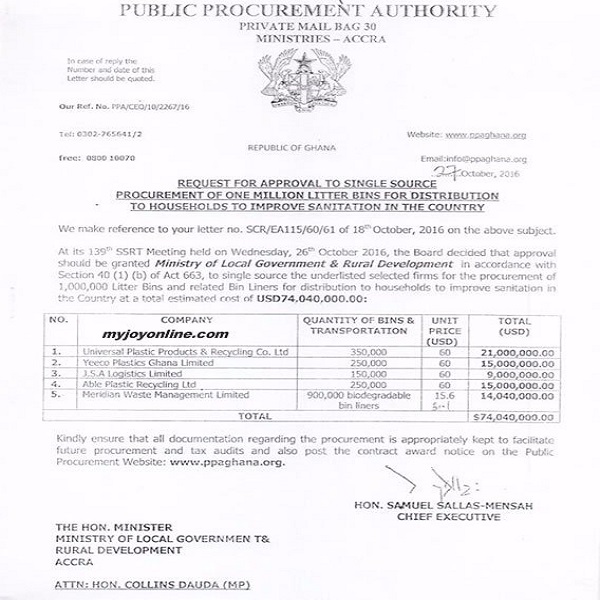 Source: Myjoyonline.com
2019-01-09
admin
Previous: Blow-by-blow account: How NAM 1 escaped through Togo border to Nigeria and then to South Africa
Next: 2 robbers nabbed by police