Unnamed FIFA Official Extradited to US

by VOA News
Swiss authorities say they have extradited one of seven detained FIFA officials to the United States to face corruption charges.
Switzerland’s Federal Office of Justice did not identify the official from football’s governing body but said he was extradited Wednesday.
“He was handed over to a three-man U.S. police escort in Zurich who accompanied him on the flight to New York,” the ministry said Thursday.
The official had agreed last week to be extradited as part of a U.S. corruption probe into FIFA.
​​He was one of seven people — all from South America or the CONCACAF zone of North and Central America and the Caribbean — arrested in a dawn raid on a Zurich hotel on May 27.
Bribery charges
The men are accused by U.S. authorities of involvement in more than $150 million of bribes given for marketing deals for football tournaments in North and South America.
A week ago, FIFA expelled former executive committee member Chuck Blazer, who admitted to accepting massive bribes and became an informant in a U.S. government investigation that has shaken the world football body.
FIFA’s ethics committee said Blazer “committed many and various acts of misconduct continuously and repeatedly” while serving in senior positions at FIFA and CONCACAF.
The 70-year-old, well-known for his opulent lifestyle and larger-than-life personality, is now wheelchair-bound and seriously ill from cancer in a New York hospital.
Blazer was an ally of FIFA President Sepp Blatter, who has agreed to step down in the wake of the scandal.
A U.S. indictment issued in May charges nine FIFA officials and five corporate executives with offenses that include racketeering, wire fraud and money laundering.

WATCH: Related video report by Ramon Taylor
​​Swiss probe
A separate Swiss investigation has been looking into allegations of mismanagement and money laundering connected to the awarding of the 2018 and 2022 World Cups to Russia and Qatar, respectively.
Swiss prosecutors are investigating 53 possible money-laundering incidents involving the bidding process for the two World Cups.
FIFA has suspended the bidding process for the 2026 World Cup because of the ongoing controversy.
The host of the 2026 world football championship was set to be chosen by FIFA members during a 2017 meeting in Malaysia.
It is not clear when the decision now will be made. 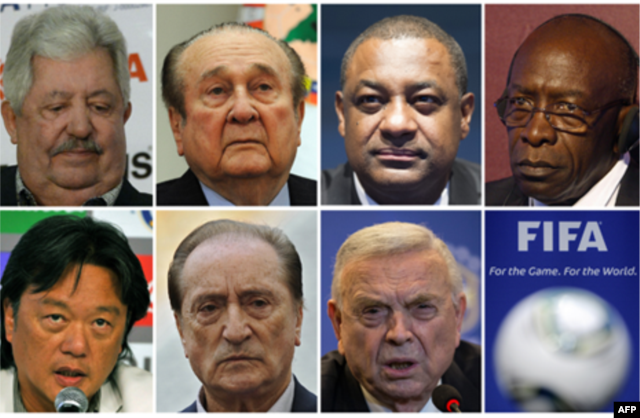 Hearts own Accra as they maul ‘Twitter gangsters’ Great Olympics