The Paramount Chief of the Yapei Traditional Area, Soale Alhassan, has expressed his appreciation to the President of the Republic, Nana Addo Dankwa Akufo-Addo, for the ongoing construction of a small-town water system, in fulfillment of a pledge he made to the people of Yapei in September, 2016

It will be recalled that on 3rd September, 2016, Yapeiwura Soale Alhassan told then candidate Akufo-Addo that “our brother (President John Mahama) is the President, by we are thirsty, even though we are surrounded by water.”

Addressing a durbar of Chiefs in Yapei on Sunday, 19th May, 2019, in honour of the President, the Yapei wura recounted his 2016 lamentations, and the pledge by the then NPP flagbearer to “remedy the situation when you get elected to the presidency.”

He stated, much to the pleasure of the people of Yapei, that “Insha Allah, within two years of your presidency, we are seeing ongoing works on the construction of a small town water supply system that will provide potable drinking water to Yapei, and I am reliably informed that the project will be completed and water will flow in our homes by October this year.”

He continued, “In fact, when I join my ancestors, I will have a good story to tell that, during my reign as Yapeiwura, and through the benevolence of President Nana Addo Dankwa Akufo-Addo, the perennial water problem in Yapei is a thing of the past.”

“You promised to give our children, the child of a charcoal seller, the child of a peasant farmer, and children of under privileged families, with access to free secondary education, and, today, hundreds of children in my jurisdiction and thousands across the country are benefitting from your free SHS policy,” he said.

Touching on the creation of the Savannah Region, the Yapei Wura thanked the President for fulfilling yet another campaign pledge.

“You stated here in my palace that you are not a Gonja and you were not related to Gonjas by birth, but you will best serve the people of Gonjaland as President, and, today, our long cherished dream of having a region of our own has been fulfilled by your government. Gonja land, which has the largest areas with abundant natural and human resources, has been blessed with Savannah Region. Savannah Region is your baby,” he added.

He also thanked President Akufo-Addo for the implementation of the programme for “Planting for Food and Jobs”, which, he said, “is impacting positively on the lives of my people and also many thousands of Ghanaians.” 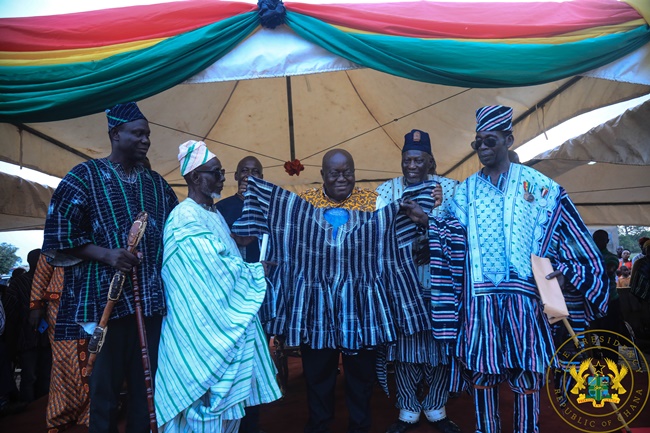