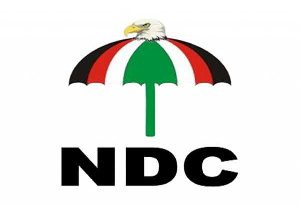 The largest opposition National Democratic Congress (NDC) was born on 10th June 1992. It is, however, more correct to say that the party was launched on that day.

According to Prof. Kwamena Ahwoi, the group that came to be known as the “Chapel Group”, because they held meetings in a wing of the castle used largely for less formal meetings and called the Castle Chapel and chaired by Justice D. F. Annan in the presence of Chairman Rawlings or co-chaired it either which Captain Kojo Tsikata or Alhaji Mahama Iddrisu addressed the matters.

“The emblem of the party was more problematic, numerous emblems suggested by the Political Committee including such ridiculous ones as a bunch of plantain and a hammer and sickle were all decided and scorned until one Prof. Kwame Addo, who was introduced to the meeting by Nana Konadu Agyeman-Rawlings, came up with the idea of the ‘umbrella’,” he said.

He said the umbrella represented Ghanaian royalty and the chieftaincy institution.

He further explained that the utility of the umbrella in protecting the old and the young, men and women alike, from both the rain and the sun, represented a most desirable and necessary friend and accessory to everybody.

Mr Ahwoi added that at the end of Prof Kwame Addo’s presentation, there was no dissent. The umbrella had become the emblem of the NDC.

For the party colours, he said it did not pose too big a problem.

“All were agreed that the NDC, taking off from the principles of justice, freedom, probity and accountability of the PNDC as the baby of the June 4th Uprising, ought to adopt the colours of the June 4 Movement, which were black, red and white,” he said.

He disclosed that Alhaji Mahama Iddrisu came up with a bright idea of adding a green underneath the white to mark a fresh beginning and the wealth of our nation forests.

The words of the party anthem “Arise, Arise for Ghana” sung to the tune of the Methodist hymn “Stand up, Stand up for Jesus” were written by Kofi Totobi-Quakyi, approved by the Political Committee and endorsed by the Chapel Group.

The NDC was ready for battle.

He gave an insight into this in his book, “Working With Rawlings”.