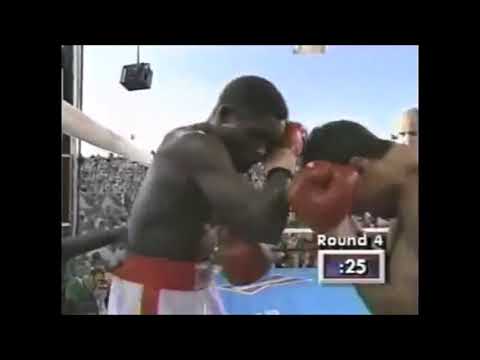 Ghanaian boxing legend Azumah Nelson celebrated his 62nd birthday last week and received good wishes from around the world including from as far as Australia.

Dave Harper, CEO of Geodrill, a leading drilling exploration company, commissioned the writing of the biography of Azumah titled “ The Professor- The Life Story of Azumah Nelson” written by Ashley Morrison in 2014.

In 2010 in the lead up to the Delhi Commonwealth Games Mr Harper arranged for Azumah to visit Perth along with the Ghana boxing team for a fight night against the Australian team. Not only was Azumah a special guest on the night but he was also in the corner as his son Dalvin had his first bout.

When Azumah returned to Australia in 2014 to promote his biography he visited gyms in Sydney, Melbourne and Perth. During a visit to one gym in Perth, Azumah spotted and was introduced to a young aspiring boxer, Caitlin Parker. Miss Parker met Azumah and also picked up a signed copy of his biography.

Thanks to the wonders of technology Azumah recently received a video clip of Miss Parker, now 21 and her journey to achieving her goal of Olympic Qualification for the Tokyo Games. This was especially poignant for Azumah who was deprived the opportunity of winning Olympic gold when Ghana, along with most African nations boycotted the 1976 Montreal Games.

Heading into the delayed Tokyo Olympics Miss Parker is a genuine medal hope for the Australian team having previously won silver at the 2018 Commonwealth Games, bronze at the Youth Olympic Games, silver at the youth world championships, bronze at junior world championships. Australia has never won a Gold medal for boxing at an Olympic Games, (a peculiar record it shares with Ghana), but Caitlin aims to win their first.

Geodrill is an Accra based firm that has long been a keen supporter of promoting Ghanaian Australian friendship through sports as well as equal opportunities for women to participate.