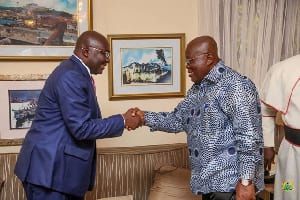 President Nana Addo Dankwa Akufo-Addo has retained his vice, Dr Mahamudu Bawumia, as his running mate for the Presidential elections in December.

The announcement which was greeted with unanimous cheers was also approved by the National Council and the National Executive Committee (NEC), making him the official running mate for Akufo-Addo.

“Today I have the honour to put into consideration with you my choice of running mate for the fourth time, the excellent hardworking vice president Alhaji Mahamadu Bawumia. With your endorsement, the party will complete its presidential ticket.

A feat that appears to elude some of our opponents. We have no such difficulty we have a most fitting person to feature on our ticket and I give you Mr digital, Mr you and I were not there, the economic prophet, the Adam Smith of Walewale, my good and loyal friend, Alhaji Mahamadu Bawumia,” he proclaimed amidst cheers.

This means that Mr Bawumia has been selected by the NPP flagbearer for the fourth straight time.

In his acceptance speech, Dr Bawumia expressed gratitude to Nana Akufo-Addo and the NPP for choosing him again and promised not to disappoint the President and the party.

Meanwhile, former President John Dramani Mahama and by extension, the National Democratic Congress are yet to make public the running mate of the NDC flagbearer.

Although a number of individuals have been speculated, Mr Mahama has noted that he is not under pressure to make the announcement and would do so in due time.