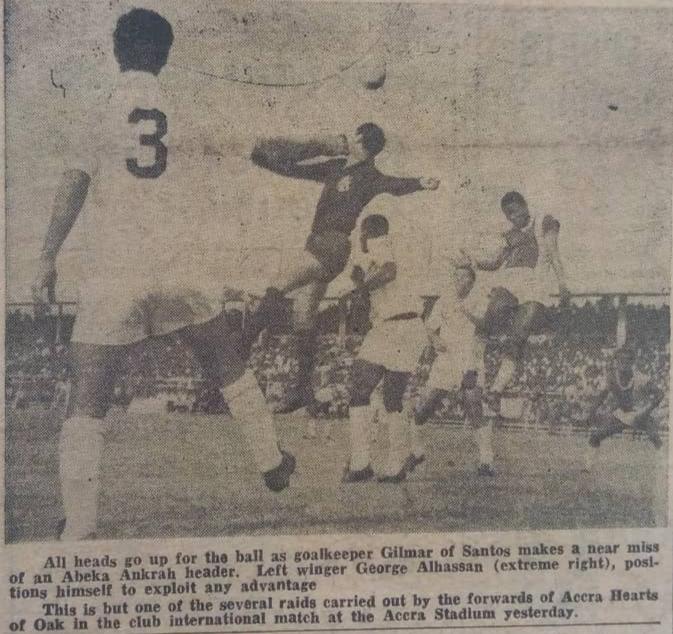 On the occasion of the passing of the Brazilian soccer legend , Edson Arantes do Nascimento ,‘Pele’ , we reproduce this article published a few years ago .


On the 6 February 1969 (Exactly 52 years ago today) Pele led Santos FC of Brazil were held by Accra Hearts of Oak to a 2-2 drawn game in an international friendly at the Accra Sports Stadium.

Striker Abeka Ankrah opened the scoring midway in the game but Edson Arantes do Nascimento ‘Pele’ struck to pull the visitors level before the break.

Ghana’s own “Pele” Amusa Gbadamoshie, restored Hearts’ lead in the second half, but midfielder Edu earned the great Brazilian side a deserving draw.

Despite the draw, Hearts still wrote their names in the history books by holding the giants from Brazil to a drawn game.

Santos FC had gone on a tour of Africa in 1969, led by the player, who would become the greatest ever to play the beautiful game, Pele. The Brazilian giants played 9 games on the continent. They won five, drew three and lost just one, and scored and conceded 19 and 11 goals respectively.

Not much was seen of the legendary Pele in the match-heralded club international match between the fabulous Santos Club of Brazil and Ghana’s Premier Club, Accra Hearts of Oak at Accra Stadium yesterday.

And when the shrill whistle of referee Major George Lamptey sounded, ending the game in a 2-2 tie, fans began to ask themselves whether the match deserves all the money spent on it, not to mention the fantastic high gate fees charged.

To say Pele is not a good player will be an underestimation. For the few occasions that he struck, fans saw in him a demon of a player.

His shooting and heading were a menace enough. And on no occasion did he give a wrong pass. But the man of the match was left winger Edu, whose superlative dribbling rendered the Hearts defence ragged.

On the whole, it was a match between skill and determination. The visitors showed plenty of skill showing superiority in every move they made.

But Hearts compensated their lack of finesse with hard unorthodox soccer, always carrying the game to their opponents. They succeeded in taking the lead on each occasion but for one or two unfortunate decisions by the referee, Hearts would have contrary to expectation, won the day.

Hearts were 1-0 up in the 27th minute when Abeka Ankrah found the net with a brilliant shot which could have made even the great Pele envious.

This goal was a morale booster for Hearts and two minutes later, opportunist goal soccer George Alhassan just missed the post by inches.

The visitors, playing as if there was nothing at stake stuck to their short pass-system. Suddenly, Pele struck and in a matter of moments, the entire Hearts defence was mesmerized. A typical Pele pass went straight to right winger Maria but his goal-bound cracking shot was brilliantly saved by Joe Adjei. This really looked like an obvious goal.

Five minutes later, Pele received a back pass and with a close range left-footer, pulled even for his side. There was some element of doubt about the goal, for linesman Hulede had been signaling that left winger Edu was completely offside.

The score stood 1-1 at half time.
Santos were in control of the game after the recess but as they repeatedly failed to find the net through over elaboration in the vital goal area Hearts soon took the initiative.

In the 55th minute, Ghana’s Pele, Amusa found the net when he had the better part of his struggle with the goalie. Amusa was injured in this process and he remained on the touch line for five minutes.

The visitors protested against the goal but later on gave in.

Substitute player Douglas pulled even the in the 67th minute with an unseen shot.

Play was balanced from this moment, bit it was Hearts who had two narrow misses. George Alhassan actually put the ball in the net in the 67th minute, but linesman Hulede who was fast becoming flag happy, ruled it offside.

Amusa missed a last minute goal which would have definitely won the day for Hearts in a match which failedd to satisfy fans, mainly because the fabulous soccer gem Pele, did not give of his best.

Elsewhere;
On this day 6 February 1958(Exactly 63 years ago today) On the darkest day in United’s history, 23 people – including eight players and three members of the club’s staff – suffered fatal injuries in the Munich Air Disaster.

The team had been travelling back from a European Cup tie against Red Star Belgrade when their aircraft stopped in Germany to refuel. The first two attempts to take off from Munich airport were aborted; following a third attempt, the plane crashed.

The Munich Air Disaster is an indelible part of United’s history, as is Sir Matt overcoming his crash injuries to work alongside his assistant Jimmy Murphy and build another great team which won the European Cup 10 years later.