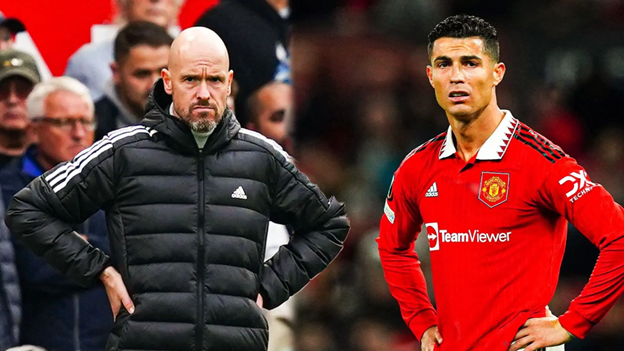 Cristiano Ronaldo claims that he feels “betrayed” by Manchester United for attempting to drive him out of the club.

He also claims that Erik ten Hag, the manager, “doesn’t show respect for me,” and that this has made him lose all respect for him.

Cristiano Ronaldo says there has been “zero progress” at Manchester United since Sir Alex Ferguson left the club in 2013.

When questioned if United’s management was attempting to get rid of him, Ronaldo responded: “Yes. Not only the coach but the other two or three guys around the club. I felt betrayed.”

“Honestly, I don’t know. I don’t care. People should hear the truth. Yes, I feel betrayed. Some people don’t want me here not only this year but last year too.

“I don’t know what’s going on. Since Sir Alex Ferguson left, I have seen no evolution in the club. The progress was zero.

“For example, an interesting point is how a club like Manchester United sacked Ole (Gunnar Solskjaer), they bring in a sporting director Ralf Rangnick which is something nobody understands.

“This guy is not even a coach! A big club like Manchester United bringing in a sporting director surprised not only me but all the world.”