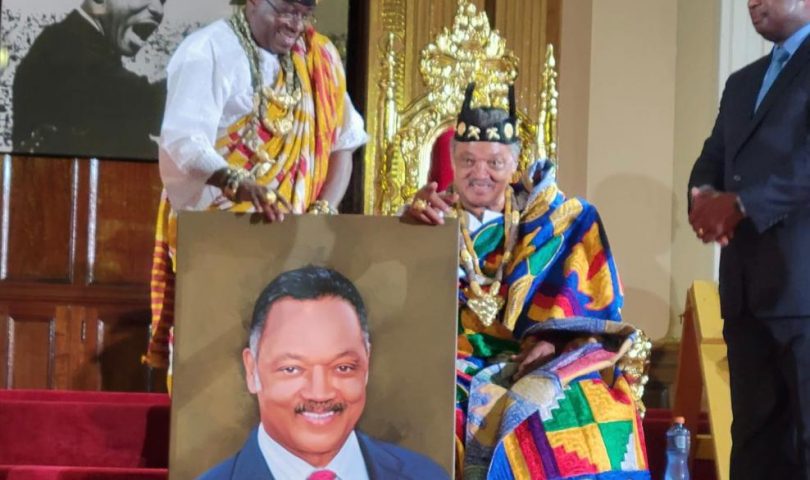 The event emphasized the tradition within the African, Caribbean, and African American communities. It was organized by The Progressive Minds Show, TPMS, moderated by Nathaniel Sena Amenyo, AKA Alinco, and the Rainbow PUSH Coalition, to honor Rev. Jackson for his legacy of leadership in the Black, national and international communities. It was a cultural explosion never seen before in the halls of Operation Rainbow PUSH. Characterized by pomp and pageantry, traditional drumming, and dancing, cheering revelers, it was an epitome of culture to be seen than described. He was decorated with beautiful Kente fabric, traditional sandals, and a crown.

Before Torgbui Jackson’s coronation, there was a presentation of gifts and blessings from the following African communities in Chicago. These are Senegal, Ethiopia, Mali, Ghana, Zimbabwe, and South Africa.

In a short address before coronating Rev. Jackson, Togbi Tamakloe VI engulfed his audience in the history of the Anlo Kingdom. He also spoke about SLAVERY and later COLONIALISM. Torgbi Tamakloe’s first statement was to request from the African American community their *forgiveness* for our forefathers’ roles in the slave trade. Next, he asked for forgiveness from those directly or indirectly affected by the heinous slave trade. These two, he opined,  were the greatest punishments to have been meted out to the Africans by the Europeans, leaving indelible scars on us. Finally, he indicated to his audience that the ANLO KINGDOM was one of the Three Kingdoms in Ghana to be recognized by the British. The Kingdom, he said, extends from Ghana to Benin, Togo, and parts of Nigeria. In conclusion, Togbi Tamaklo VI invited all African Americans to return home to their roots and help build a New Africa.

In her keynote speech, Dr.Melinda Harris-Barrow asked  Africans to have a new identity, recognize the new paradigm and urge African Americans to return to their ancestral home. She indicated that the African American community had taken the lead and held its first Convention in Panama, with the intention to visit Africa in the coming days.

After his coronation, Rev. Jesse Jackson recounted his many visits to Africa and Ghana, particularly his work with other African Greats such as the late Nelson Mandela and others to help change the African narrative. He thanked Torgbi Tamakloe VI and the Progressive Minds show. He described the award as a significant honor done him.

Born October 8, 1941, in Greenville, South Carolina, Rev. Jesse Jackson dedicated his life to civil rights issues. His bids for the U.S. presidency in the Democratic Party’s nomination races in 1983–84 and 1987–88 were the most successful by an African American until 2008 when Barack Obama captured the Democratic presidential nomination and went on to win the presidency.

He founded Operation PUSH (People United to Save Humanity), a Chicago-based organization where he advocated for Black self-help and achieved a broad audience for his progressive views. In 1984, he established the National Rainbow Coalition, which sought equal rights for African Americans, women, and others. These two organizations merged in 1996 to form the Rainbow/PUSH Coalition.

On the international scene, Rev. Jesse Jackson traveled widely in the late 1970s to mediate or draw attention to global problems and disputes. In 1979 he visited South Africa, where he spoke out against the evil regime of apartheid. Rev. Jackson dared into the strife-ridden Middle East and campaigned to give Palestinians their own state. He won praise and admiration for negotiating the release of U.S. soldiers and civilians around the world. These include his travels to Syria in 1984, Iraq in 1990, and Yugoslavia in 1999.

Jesse Jackson will forever be remembered as a civil rights icon and an American hero for his tremendous works over the years.