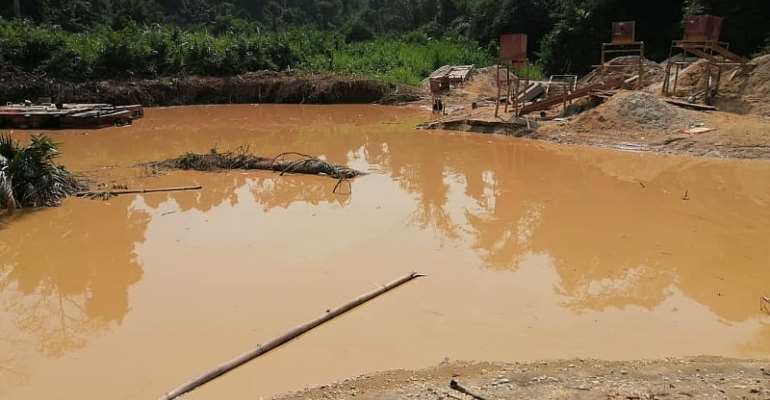 The Water And Galamsey Tango

WATER, they say, is life, and its importance is demonstrated by its delivery of nutrients to the body cells and making one feel full. Its legendary use for cooking and for washing cannot be discounted. In the past, our ancestors settled around rivers so as to get enough water for domestic use. The Akyems, for example, were proud to call themselves: “Akyem-kwaa a menom Birim.” (A contended Akyem-born who drinks from Birim River). Can the Akyems say this now? At school we were taught that water is colourless, tasteless and odorless. What is happening to our river bodies? River Offin, River Pra, what!

If you are like some of us, you cannot but weep (nay, mourn) over the destruction of our water bodies as a result of the activities of illegal miners, called ‘galamsey’.

Otumfuo Osei Tutu II Asantehene recalls our ancestors’ respect for our rivers: the fact that there were selected days when people were stopped from going to particular rivers. He decried the activities of the galamsayers, and noted: “if managed properly we can mine without harming the environment. We can also do so by training the human resource to mine in an environmentally friendly manner.”

This is an excellent charge to the new Minister of Lands and Natural Resources Hon. Samuel Abu Jinapor.

Otumfuo remarked that the nation could not wait any longer in ensuring a complete elimination of the canker of galamsey since this was the surest way to protect the nation’s natural resources and water bodies. Otumfuo who has been a champion of environmental protection lamented the devastation caused by illegal mining.

Nana Kobina Nketsia V, the Paramount Chief of Essikado Traditional Area, said it loud when he called all persons engaged in galamsey as “criminals” and charged all and sundry to join in a collective effort to fight the menace, otherwise, “the country and the next generation will be the biggest losers.”

GALAMSEY is a Ghanaian coinage of the activities of local illegal small-scale mining: “gather am and sell”. Talking of gold, let us state that Ghana used to be called the ‘Gold Coast’ during the colonial period, till 6th March, 1957 when we attained independence, whereas up to the late 19th century, it was part of what was called the Slave Coast. That was the time La Cote d’Ivoire used to be called Windward Coast, and Liberia was called Pepper Coast because of the abundance of the meleguera pepper.

From 1921, the British who had suzerainty over Ghana, named the colony, Gold Coast because of the abundance of gold. Even as far back as 1471 when the Portuguese first arrived on this land, they identified La Mina (Elmina), The local Fantes call it Edina. It was named after St. George of Mine, as an attractive port for gold. Gold, legally mined, and exported brings in much revenue to the country, and we are now proud to be in the forefront of world gold exporters. We have legal miners who include the Anglo-Gold based in Obuasi-Ashanti.

And the Overlord of Akyem Abuakwa Okyenhene Osagyefuo Amoatia Ofori Panin thinks the government’s community mining programme is a “disguised galamsey.” In an address before the Eastern Regional Minister, he noted: “We understand all documents and licence needed for one to undertake mining rest in the bosom of the President in Accra, so if one obtains the licence then he will bring it to the DCE at the local level where normally durbars are held to inform the people, but the chiefs do not have any say in it. When all is said, these guys will then approach the chiefs informing them about their acquired licence to mine in the community…But the chiefs will then be blamed after lands and water bodies are destroyed in the process.”

As all the Nananom say: “This is not a fight for a particular person or ministry and government. It is a national fight …”

Hence, we brood over what has happened in the recent past: the “seeming” failure of the various organs of the Police, Army and Civilian organizations sent to the suspected illegal mining areas. We should not be happy to report that over 500 excavators seized have just supposedly vanished and they cannot be traced!

What is even regrettable is the active participation of foreigners, including West African nationals, the Far East people of the Han and Mandarin ancestry,

And Mr. Shi Ting Wang the Chinese Ambassador to Ghana told us what we wanted to hear: “We don’t know where your gold is. We don’t issue visas too for the Chinese people coming to Ghana. Ghanaians issue the visas. Ghanaians aid the Chinese to where they can find your gold. Why are Chinese not doing illegal mining in South Africa where there is a lot of gold… because they cannot do that there and the locals don’t support such illegalities.” Any lesson?