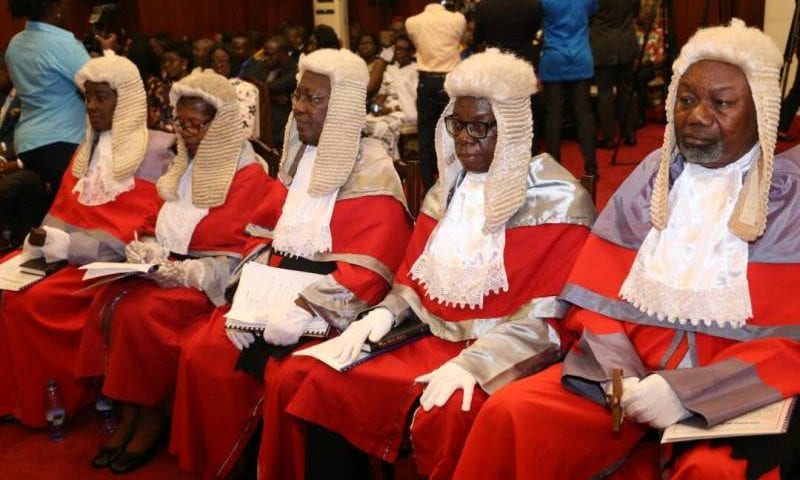 Fellow Ghanaians, our liberties are under assault by the very judges tasked with protecting them!

Forget the winners and losers of this petition before the Supreme Court. Forget which party you belong to.

This case will cost us our most fundamental liberties.

And the biggest loser will be our judiciary.

The Supreme Court has threatened to hold in contempt any disagreeable voices and it has compelled Dr. Ayine to recant opinions that would be routine in many other jurisdictions. And to his discredit and our dismay, he has capitulated– to our collective detriment. Unfortunately, to a judiciary drunk with power, that was not enough.

The Judicial Service, which is the trade union of judges, has warned media houses and by implication, the public from publishing or making statements and speeches that ” insinuate that the decisions of the judges are motivated by factors outside legal principles and proper judicial considerations “. Furthermore, the statement claimed that such ” statements and speeches threaten our constitutional order and democracy”.

Really? So, if the Judicial Services, acting for our judges go to court to litigate this “cease and desist order” to the media, the judges, who are its members, on behalf of whom their statement was issued, would be judging their own case? Has the Judicial Service ever heard of ” conflict of interest”?

Of course, judges frequently consider non-legal and extra-constitutional factors in making decisions. How else were Dredd Scott, Plessy vs Ferguson, and re: Akoto decided? How were our military dictators sworn into office? On constitutional and legal grounds? No honest person believes that.

Article 21 of our 1992 constitution clearly guarantees our rights to ” a: freedom of speech and expression which shall include freedom of the press and other media.

b: freedom of thought, conscience, and belief which shall include academic freedom”.

These freedoms are further reinforced by the “Directive Principles of State Policy” in 35(4) ” The state shall cultivate among all Ghanaians respect for fundamental human rights and freedoms and the dignity of the human person”. While our Supreme Court and any other court must have the power to hold people in contempt, there must be reasonable limits that would not curtail the courts of the very right are supposed to protect.

Indeed, in Bridges vs California, a 1941 case, the US Supreme Court opined that the ” contempt power of all courts, federal as well as state, is limited by the guaranty of the First Amendment against interference with freedom of speech or of the press”.

We may rightly reject American and Western notions of marriage but the principle elucidated by this case is timeless and universal.

Some day, under a future President, His Excellency Yenkamasem, if in response to an odious deal, I, consistent with this President’s admonition to be ” a citizen, not a spectator” condemn the President and I am detained for insulting him, who shall I look to for vindication of my rights? The courts that don’t tolerate disagreement? The courts suppressing dissent? How can I trust them?

The President of the Ghana Journalists Association was right to describe what is happening as ” tantamount to an unwarranted assault on all the tenets of freedom of speech and freedom of the media guaranteed by the 1992 constitution. “

The danger to our constitutional order is not disagreement with or criticism of our courts. It is the suppression of our freedoms by the very courts enjoined with protecting us.

Therefore, my fellow citizens, regardless of party, let us be PRINCIPLED CONTEMNORS until our courts understand clearly, the guarantees enshrined, not just in our constitution, but also in our motto, “Freedom and Justice”.